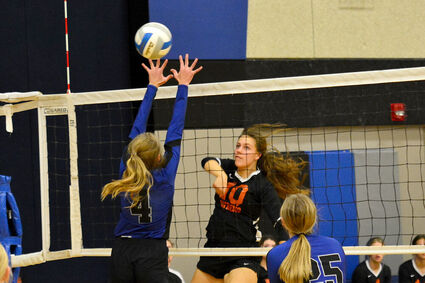 Wrenshall's Janae Sjodin gets a hit past South Ridge defender Svea Snickers during Tuesday night's matchup between the Wrens and the Panthers at South Ridge.

So far this season both the Wrenshall and South Ridge volleyball teams have had to learn to adjust, thanks to injuries and the occasional Covid-19 exposure.

Before their match Tuesday, the Pine Knot News sports department had a chance to catch up with both coaches to find out just how their seasons have progressed so far this season.

"We had been playing pretty well until we suffered some injuries," said South Ridge head coach Brad Olesiak. "When we lost Svea Snickers to an injury, it changed a lot of things for us and we've been trying to figure out what is the best thing to do."

After moving different players into different roles, Olesiak decided to give freshman Mercedes Lawrence a shot as a middle hitter. That seemed to stabilize things for the Panthers. And Snickers came back this week. She was leading the team in kills before her injury.

With a 12-6 record going into Tuesday, the Panthers have had an impressive start to the season. Senior outside hitter Phylesha Preston, libero Adella Olesiak, setter Bella Schneider, middle hitter Lauren Olson and outside hitter Kelly Bergum have all been important cogs in the wheel so far this season.

"We've competed with everyone and if we can put it together, pick up our offensive pace, and play a complete game we'll be tough to beat," Olesiak said.

Over in Wrenshall the Wrens are also having a solid season, as they headed into Tuesday night's match with a record of 6-9.

"We have a scrappy bunch of kids," said Wrens coach John Peterson. "We just don't have a lot of height, so we need to fight and scrap for every ball we can keep off the floor."

A week ago the Wrens played in a tournament at Duluth Marshall and surprised the field by taking second place. Like South Ridge, they were missing a key player, in Jenna Johnson recently.

"She's our senior captain and is a key to everything we do," Peterson said. "She is 100 -percent our floor captain, she's a good hitter, a good passer and has been starting varsity since eighth grade and she is a senior now."

Another important player for Wrenshall is Janae Sjodin, who leads the team in kills and digs.

"She has stepped up and is playing great for us," said Peterson. "The team has come together better than I thought they would and if we can continue to come together we will see more wins because these kids are fighters."

On Monday night, the Wrens got welcome news when Johnson returned to the lineup, but it was not enough for them to overcome Ogilvie as they fell 3-0 by scores of 29-27, 25-22 and 25-19. Johnson finished with four kills and 10 digs. Other key players for the Wrens were Jordyn Harvey, with seven kills and 12 digs; Emalee Nelson, six kills and six digs; Lacy Lekander, four ace serves, 18 assists and six digs; Hanna Pearthree, four kills and 10 digs; Magdalene Sowada with six digs, and Sjodin, who finished with five kills, two ace serves and 19 digs. 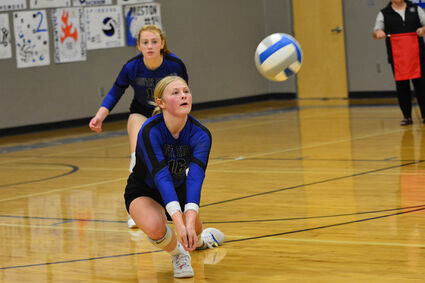 While the Wrens were losing on Monday night the Panthers were downing Northwood's 3-0 behind a 26-set-assist night from Bella Schneider. Preston added 11 kills and 20 digs, libero Olesiak added 32 digs in the back row, Bergum chipped in with five kills and 15 digs and Lawrence rounded out the night with five kills and three blocks.

Leading the way for the Panthers was Schneider with an impressive 28 set assists. Snickers returned to the floor to lead the Panthers with eight kills followed by Preston with seven and Lauren Olson with six. Preston also added 14 digs and nine ace serves while Adella Olesiak had a big night with 25 digs in the back row.