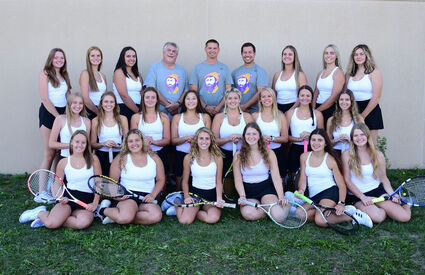 The Cloquet-Esko-Carlton girls tennis team finished its season with the most wins in Lumberjacks history and the most girls playing tennis.

The Section 7AA girls team tennis tournament is one of the toughest sections in the state. With an unprecedented 17 teams, it is almost impossible to win a section title.

No team knows that better than the Lumberjacks, who won a school-record 18 games yet were bounced in the second round of sectional play.

"There are three or four teams in the section that had only one or two losses," said Cloquet-Esko-Carlton coach Derek Johnson. "We had the most wins in school history and had an 18-5 record, and we still were only the No. 8 seed."

To put things into perspective, Pequot Lakes had no losses this season, while Elk River, Brainerd and Cambridge all had just one loss. Hibbing had a pair of losses.

"We were a senior-dominated team and it showed," said Johnson. "Just four years ago we were 1-21 and many of these seniors were on this team. I don't think people realize just how much these girls have improved."

This year's 'Jacks squad featured 15 seniors; nine of those were in the lineup on a consistent basis. Every single player in the CEC lineup had a winning record this season. That's unheard of in school history.

"We had 45 girls out for tennis this year, compared to just 13 or 14 just five years ago," Johnson said. "I think doing community education tennis in the summer has helped a lot in getting our numbers up. When you have numbers, that helps the depth and brings out the competition in the girls."

CEC opened sectional play by knocking off Grand Rapids 6-1 last Tuesday, but then fell to Elk River 7-0, the No. 1 Section 7AA seed, on Thursday. Against Grand Rapids, the 'Jacks won all four singles matches. Marina Dostal at No. 1, Winnie Benjamin-Hall at No. 2, Lydia Stone at No. 3 and Addie Loeb at No. 4 all won their matches. In doubles the No. 2 CEC team of Carlee Maslowski and Dana Jones were winners, as was the CEC No. 3 doubles team of Alexis Goranson and Bella Harriman. The lone loss came at the No. 1 doubles spot, where Brynn Martin and Jayden Karppinen lost the first set, won the second and fell in a super tiebreaker in the third set.

Despite being knocked out of the team competition, the Lumberjacks sent a contingent of players to the individual portion of the sectional meet.

CEC's Winnie Benjamin-Hall won her first match by beating Kasey Jo Renskers of Hibbing 6-0, 6-0, but then fell to Ella Claussee of Brainerd 6-3, 6-2 in the second round.

The CEC doubles team of Carlee Maslowski and Dana Jones lost their opening round match to the Hibbing duo of Claire Rewertz and Megan Bussey.

Lumberjacks team Brynn Martin and Jayden Karppinen took down Ally Johnson and Erin Holliday of Duluth East in their opening round match 6-3, 6-2, but were then beaten by the Hibbing team of Abi Sullivan and Annika Lundell by scores of 6-2, 6-2.

"I am hoping that we can use this season to show the girls that we can compete against the best," said Johnson. "This was a great season, but we can build on this and I hope we can continue to build this program."