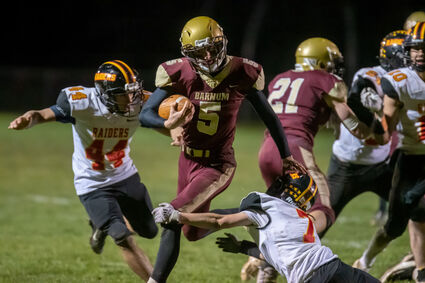 Barnum running back Caden Sheff breaks a tackle attempt from Jotus Spengler of Mille Lacs to race to the end zone for his second touchdown Tuesday in Barnum.

Barnum broke open a one-score halftime lead with a big third quarter to advance to the semifinal round of the 7A football playoffs Saturday, defeating Mille Lacs 42-20 in a Tuesday night quarterfinal win at home.

Up 20-13 after two quarters, the Bombers scored 90 seconds into the third on sophomore running back Caden Sheff's 26-yard touchdown run. That was followed by senior JJ Stevens' 19-yard TD catch nearly four minutes into the third. Add in senior Willie Richardson's 7-yard rushing score toward the end of the third frame, and Barnum took a commanding 42-13 advantage heading to the final stanza.

"That was a big quarter for us," said Barnum head coach Robert Minkkinen after the game. "We were able to shut them down in the third after they threw the kitchen sink at us in the first half."

The same two teams played Oct. 1 in Barnum during the regular season, with Barnum shutting out the Raiders 70-0. Tuesday's contest resembled anything but a lopsided score early on, with Mille Lacs counting on a number of gadget plays to stay in it at the beginning.

The Bombers found the end zone on their opening drive after holding the Raiders to a three-and-out on their first set of downs. Sophomore quarterback Hayden Charboneau marched in from 34-yards out for a 6-0 advantage. After a missed two-point conversion by Barnum, Mille Lacs answered four-and-a-half minutes later with a 34-yard touchdown pass from quarterback Daniel Miller to receiver Cole Dangers. An extra point later, the Raiders led 7-6 after one quarter. 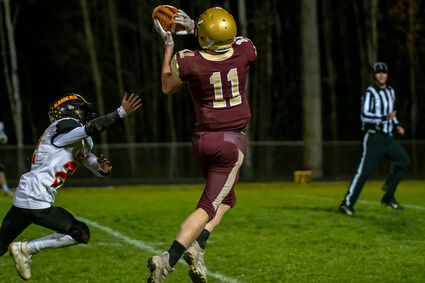 Barnum tight end Joe Peterson snared a reception during fourth quarter action at Barnum High School Tuesday night as the Bombers got by Mille Lacs in the first round of the playoffs.

The Bombers struck quickly in the second, scoring 49 seconds in on a Richardson 5-yard run, adding a two-point conversion to take a 14-7 lead. Following a fumble on the ensuing kickoff, Barnum turned it into points less than a minute later when Sheff broke free for a 37-yard touchdown run. A.J. Drift answered for the Raiders a half-quarter later to cut the deficit to 20-13 before the halftime break.

Mille Lacs scored the only points in the fourth quarter on a Drift 1-yard run that was set up on his 25-yard reception a couple plays earlier in the drive and a hook-and-ladder play a few plays before that.

"It was a nice win for us and we're excited for the next game," Minkkinen said. That next game for No. 3 seeded Barnum (6-3) will be at North Woods in Cook against the second-seeded Grizzlies at 2 p.m. Saturday in the 7A semifinals.