Bevy of 7A county runners make the State meet cut 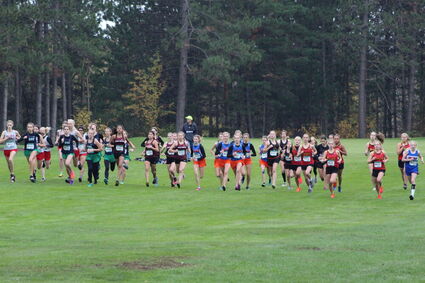 The Section 7A girls race had many successes for Carlton County runners.

The ending of the Section 7A races Thursday were markedly different: Cromwell junior Noah Foster finished alone and unruffled - more than 23 seconds ahead of the second-place runner - while Panthers freshman Addison Burckhardt sprinted to beat her nearest competitor to the finish line.

"I got like 20 seconds faster in this race," said Burckhardt, who finished in 19:54.80. "At the end, that girl (Ely seventh-grader Molly Brophy) was about to pass me and I just thought, I really want to win."

Thursday was a banner day for many runners in Carlton County and nearby South Ridge. The Carlton/Wrenshall girls team took first place in the girls meet with 75 points, followed by South Ridge with 91. The Esko boys team came in second with 70 points, after Greenway High School with 48.

The top two teams and the next six athletes qualify to race at state.

For Cromwell-Wright, that means first-place Foster will be joined on his trip back to the state meet by teammate Emaleigh Olesiak, who placed ninth in the girls race.

"Two years these two went to state," said an "elated" Cromwell-Wright head coach Pete Koenig, "but with Covid last year things were a little messed up." Olesiak had struggled with injuries both this season and last, he said, but decided she was going to keep running this year. On Thursday she "blew it out of the water," Koenig said. "We kind of had a plan and she worked the plan perfectly," he said.

Foster did his work "on the front end," the Cardinals coach said, estimating his top runner probably clocked about 300 miles this summer. "He trains hard to get himself to a good place."

Addison Burckhardt led the Panthers girls team, which took second place Thursday and qualified as a team to race in the state meet Saturday at St. Olaf College in Northfield. Her twin brother, Alex Burkhardt, also qualified for the state meet as an individual after taking 10th place in the boys 7AA meet.

The Carlton/Wrenshall girls team thought they had a shot at winning, said Raptors coach Erik Holter. He was happy, especially since it's only the fourth year for the combined Carlton/Wrenshall program, which also boasts a strong contingent of homeschool students.

"Each year we have been improving drastically, with this year being our best," Holter said. "This team has truly found itself as a family, even though we are made up of student athletes from two separate districts. Even for the first year, within a week they were a team and forming solid friendships with each other."

It's not the first time a combined Carlton/Wrenshall team has made it to state, according to Facebook. Amy Utech posted congratulations to the team on the Pine Knot News Facebook page, with a note saying the first Carlton/Wrenshall girls team went to state in 2000. "You'd better beat our placement of eighth at state!" Utech wrote.

The Raptors' sole statebound boys runner, sophomore Jack Riley, was happy with his sixth-place finish. "I couldn't have gone faster," he said.

Also a track runner, Riley said he prefers cross country for its longer distance and the aesthetics. "Each meet is different, and the courses are pretty, whereas track it's all the same really. The conditions were perfect today too." 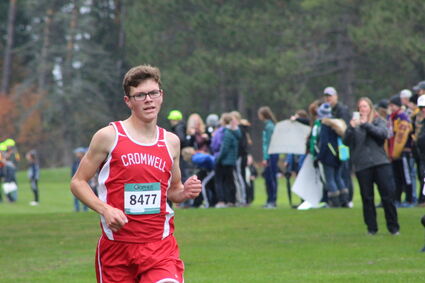 Noah Foster, a junior at Cromwell-Wright, cruised to a first place finish at the Section 7A meet in Cloquet.

Esko coach Jerimy Hallsten said both the girls and boys Esko teams performed to their potential with most of the runners having season best times. "I couldn't have been prouder of all of them," he said. "My hopes for the boys team and Grace Hrabik is that they're able to enjoy the experience, put forth the same effort they have all season, have some fun and let the proverbial cards fall where they may."

"Our top five girls all had personal bests, so I couldn't be more excited and I couldn't expect any more than that.

Foster is looking for more.

Editor's note: The web version of this story was updated to include input from the Esko coach.