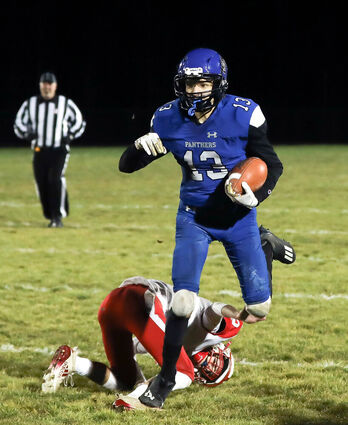 South Ridge and Cromwell-Wright met Saturday night in a Section 5 nine-man semifinal with the Panthers barely hanging on for a 26-24 win.

"It was a wild game," said Panthers coach Brent Johnson. "It came right down to the end and we were able to hang in there and get a win."

Things looked good for the Panthers right from the opening kickoff when Tony Cummins took the kick 90 yards for a score, making it 6-0 after the two-point conversion run was stuffed by the Cardinals.

"We played poorly in the first half," said Cromwell-Wright head coach Jeff Gronner. "We gave up too many big plays and had a couple turnovers, and those are the two things we talked about not allowing. South Ridge is bigger and stronger than us, but we just didn't perform well in the first half."

Cummins' return was just the start of the wild series of events in this game. The Cardinals responded with an Andres Vallejo 5-yard touchdown run on Cromwell's first drive to tie the game at 6-6 when the two-point conversion run was stopped by the Panthers. Before the first quarter ended, South Ridge regained the lead on a Mason Bennett 24-yard touchdown scamper, but, again, the two-point conversion try failed. The score was now 12-6 for the Panthers after one quarter. "In the first half we moved the ball well on offense and we were blocking well," Johnson said.

"I told the boys at halftime we can't afford to let up," Johnson said.

The Cards had to overcome an injury to starting quarterback Dylan Nyberg in the second half.

"Nyberg played the first half, but he was only about 75-percent coming into the game and he was dealing with a knee issue," said coach Gronner. "He gutted it out and tried to help us, but we shut him down at halftime. We went back to our 'wildcat' offense without a quarterback in the second half. And Andres Vallejo and Zevvus Smith took most of the snaps." 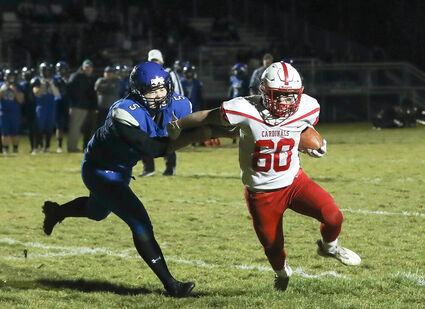 The second half was all Cromwell-Wright. In the third quarter Smith pounded the ball into the end zone on a 3-yard touchdown run to make the score 26-12 after a conversion pass failed. The Cards added another third-quarter touchdown when Vallejo ripped off an impressive 49-yard run, making it a 26-18 game entering the fourth quarter.

"We controlled the second half on both sides of the ball," said Gronner.

In the fourth quarter, Vallejo added another amazing run, a 51-yard touchdown dash that cut the lead to 26-24.

South Ridge attempted to run out the clock, but the Cards managed to get a stop on defense, which allowed them one last chance to win the game.

"We ended up stopping South Ridge on fourth down to get the ball back with just over a minute to go with no timeouts," Gronner said. "We gained enough yards to attempt a 29-yard field goal with 13 seconds left, but it was blocked."

The Cards moved on to the championship game this week against Ogilvie.