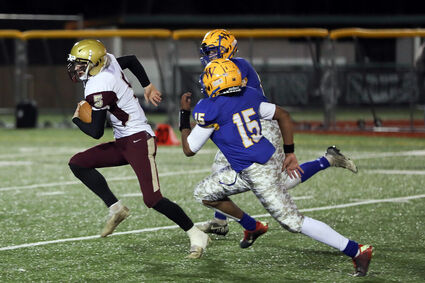 Barnum's Caden Sheff runs past the Deer River defense for a first-half touchdown during Friday's Section 7A football championship in Proctor.

After a 5-3 regular season, the Barnum football team got on a roll in the Section 7A playoffs. The Bombers steamrolled Mille Lacs in their quarterfinal game, and then did the same to North Woods in their semifinal matchup. Last Friday the storybook-style ending came up a bit short as Deer River ended the Bombers season in a 32-8 final at Proctor's Terry Egerdahl Memorial Field.

"I was so pleased and excited for the kids and couldn't have asked for more," said Barnum coach Rob Minkkinen. "Prior to the season, Deer River and North Woods were considered the favorites in the section. Our guys worked hard to find a way to get into that top tier of teams in our section."

Barnum avenged an early-season defeat at the hands of North Woods, but were unable to do the same against a stout defensive team from Deer River Friday night.

"They are a talented, well-coached, physical team," Minkkinen said of the Warriors. "They have good backs and we made just too many mistakes to win."

Both of the Warriors' first scores came as a result of miscues by the Bombers offense.

"On our first possession we bobbled a ball that was taken away by the defense and eventually resulted in a score," said Minkkinen. "Then they blocked a punt, which allowed them another short field for a score, so that put us in a hole early."

Trailing 26-0, the Bombers were able to score just before halftime when quarterback Hayden Charboneau hit Caden Sheff for a 60-yard touchdown pass. Following the 2-point conversion run by Sheff, the score stood 26-8 at halftime. 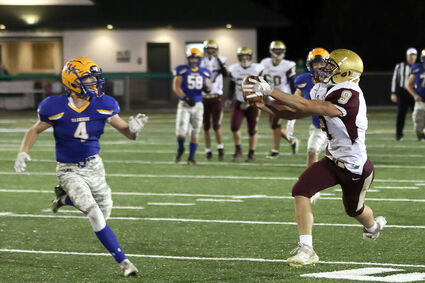 "After halftime our guys dug in their heels and did a great job defensively and of avoiding mistakes," said Minkkinen. "They didn't score again until about 30 seconds left in the game. Our field position was better because we avoided the fumbles and interceptions. Our guys came out and played a very physical game, but we just had some unfortunate things go against us early in the game that we weren't able to overcome."

Charboneau had an impressive game at quarterback as he went 15-for-30 in the passing department, good for 191 yards and a touchdown. Joe Peterson caught six catches for 54 yards and Sheff added a pair of catches for 73 yards and a score.

On defense, Sheff had a big game with 18 tackles. Max Moors finished with 12 tackles and both Willie Richardson and Alec Sparks had 11 tackles. Richardson also forced a fumble in the game.

"Our guys came to play and had a couple of things go wrong early, but I couldn't be prouder of how far this group has come," said Minkkinen. "I also couldn't have asked much more from this group. Our kids did a nice job all season and should be proud of how well they did."