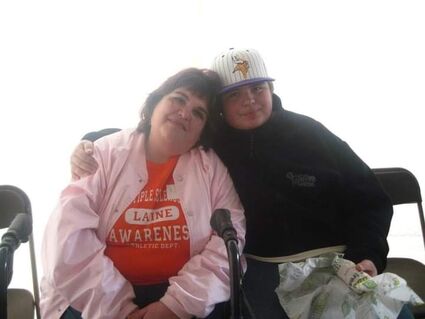 "You don't think something will happen that fast," said Chad Laine.

He explains how quickly his brother's Covid-19 infection progressed from something Connor was hoping he could sleep off in a few days to the 24-year-old not being able to breathe properly.

Both Connor and his mother, Karen Laine, died last month from Covid: Karen on Friday, Nov. 12 and Connor three days later, on Nov. 15.

Both of them brought a lot of positive energy into a room, their two surviving family members said Tuesday when they were sharing memories with the Pine Knot News.

"Mom could make friends with anybody," Chad said. "She was so friendly, and she always said what was on her mind. She was genuine."

Connor didn't talk as much as his mother. He was on the shy side, his dad said. But he was the kind of person who would help anyone, Chad said, especially if they were having computer or video game issues. He was a self-taught expert in matters of electronics, taking things apart and putting them back together again while he was still in elementary school. He loved video games: playing them (often with his brother), collecting them, enjoying the moments. He was also very into "anything Japanese," said Chad, including video games, culture and anime, or Japanese animation.

WKLK's Jake Kachinske remembers when Connor worked for the local radio station as a board operator - running ads in between the play-by-play broadcasts - starting when he was still in high school. "He was a quieter kid, but he was a very smart person," Kachinske said. "He ran the board for us, but he was much more than that. He was just so smart, technically speaking. And polite, and nice."

She loved to watch football, Bernie said. She was probably the biggest football fan in the house, and definitely the loudest, he said.

"And when the game wasn't going good, she would be swearing up a storm," he said, smiling.

The Vikings were her No. 1 team: she adopted them after they moved to Minnesota, first to Carlton, then Cloquet in 2002. That's when her original No. 1 team - the San Francisco 49ers - became her second-favorite team.

Connor played football at high school in Carlton and still enjoyed watching games, albeit more quietly than his mother.

"They were both kind, positive people that made big impacts on everyone they met," Chad said. "They would always help people without expecting anything in return."

"They are missed," said Bernie.

Karen, who had multiple sclerosis, was vaccinated. She knew she was high-risk, and her MS was getting worse. "She was waiting for her booster," Bernie said, adding that he'd had "two plus a booster plus the flu shot." Chad and Connor weren't vaccinated. Connor was nervous about the vaccine because of "stuff he'd heard about it," Chad said, even though he had asthma.

About two weeks before he got sick, he told Chad he planned to get vaccinated.

Chad said he worried about Connor in the beginning of the pandemic. He was born about a month early with underdeveloped lungs and had asthma. His little brother got sick a few times, never tested positive, and recovered quickly. "After like a year-and-a- half went by and nothing happened, I just kind of figured he'd be alright, you know?"

All four family members had symptoms of Covid, but both Bernie and Chad tested negative and got better pretty quickly. Bernie lost his sense of taste for about a day-and-a-half, so odds are pretty good he had it and the test was incorrect.

They don't know where exactly the virus came from. Connor worked at Interstate Parking. Karen had recently resigned from working in the call center at Black Bear Resort Casino - a job she had loved - and she hadn't been out and about much for at least a month. "It just doesn't make sense," Chad said.

About the same time Chad and Bernie were getting better, Karen and Connor both took a turn for the worse.

"They were sick around a week, then they went to the hospital and, you know, that was it," Chad said. Connor got it a few days before Karen. At first, he wasn't "super sick," Chad said. "A few more days and he had to go to the hospital." Connor couldn't take full breaths of air anymore - his lungs wouldn't let him.

"It just happened so fast," his brother said, again.

Bernie brought them both to Community Memorial Hospital in Cloquet on Oct. 16, a Saturday.

Connor was airlifted on Nov. 17 to Abbott Northwestern in Minneapolis. Karen stayed at CMH for a few days before she was transferred to St. Luke's in Duluth.

They were sedated the whole time, Chad said.

"Luckily, the last time I got to talk to either of them on the phone, I was able to tell them both that I loved them. And they were able to say it back to me," he said.

They didn't give up. Connor had youth on his side. Karen had a fiery spirit. Even though they were sedated, Bernie and Chad would go and sit with them and talk to them, trying to be encouraging, telling them they loved them.

"One thing I'm thankful for is that we were able to be there for the last moments," Chad said, his voice thick with emotion. "You know, be able to talk to them ... like the last time you know, tell them how you felt about stuff."

Chad got Connor's friends to send text messages too, which he read aloud to his brother.

"He was my best friend too," Chad said. "He was always there for me when I needed him."

Bernie and Karen met in Roswell, New Mexico, her home state. Bernie grew up in southern Carlton County with his 14 siblings, going to school in Barnum. Chad was born in Florida, Connor in Cloquet. The four of them still shared their longtime home on Eighth Street, except now their family has been reduced by half.

During Karen and Connor's illness and since they both passed, Bernie and Chad have gotten lots of support from extended family members, including Bernie's siblings and their kids. He has close to 25 nieces and nephews.

One of those nieces, Aleah Fleming, started a GoFundMe page "Memorial Expenses for Karen and Connor." They're hoping to raise up to $10,000 to help cover the costs of a funeral in May and other expenses. As of Tuesday night, five people had raised $825 between them. Bernie said they're hoping Karen's parents, brother and sister can fly up and attend. 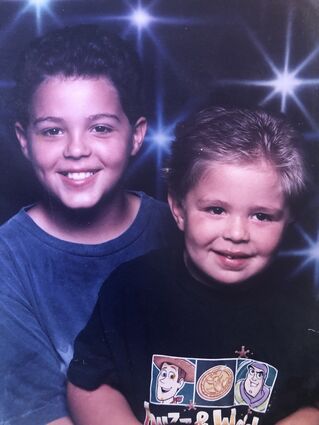 A big brother lost his little brother and his mother due to Covid-19. A father lost his son and his wife. The Laine family was cut in half when Connor and Karen died last month. Now Chad and his dad, Bernie, are looking back on their lives, including family photos.

In the meantime, Bernie and Chad celebrated Thanksgiving together, their first holiday without Bernie's wife and Chad's best friend. Bernie cooked turkey and some of the fixings.

"We had turkey and the normal, and watched football. Somewhat normal," he said, soberly. "It was quieter."

At least the Cowboys lost, Chad pointed out.

"Karen hated the Cowboys, even though she was born in Texas," Bernie said.

The father and son watched the Vikings game Sunday too, which they lost 34-26 to the 49ers "in the end, as usual," said Chad.

"I don't know who she was cheering for in that game," Bernie said.

"There wasn't much swearing in the house," he said.

When asked whether they had any advice for others, Bernie said: "Be aware. If you have symptoms, get tested. The sooner, the better. Covid doesn't discriminate against anybody."