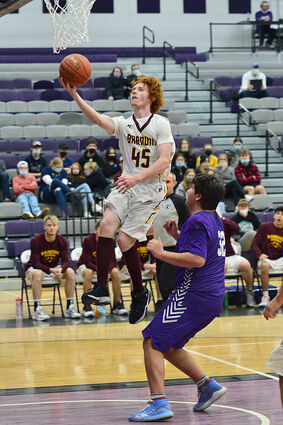 Barnum's Matthew Berry glides to the rim as he puts two points on the board against Cloquet Friday.

After a slow start Friday, the Cloquet boys basketball team bounced back with an impressive early-season win against a good Barnum squad. The Lumberjacks relied on some strong play from Connor Barney to pull out the hard-fought 77-68 win in Cloquet.

"They came out and jumped on us right away with (Joe) Peterson dropping in a couple of three-point shots," said Cloquet head coach Steve Battaglia.

As the first half continued, the Lumberjacks made an effort to get the ball in to Barney, who began to wear down the much smaller Bombers.

"In the first half our kids weren't physical enough against Barney," said Barnum coach Rich Newman. "Barney is athletic, strong and when he's one-on-one against any of our players, he will win most of those battles."

Barney pumped in a game-high 35 points - 26 of those came in the first half as Cloquet edged out to a 41-37 halftime lead.

"In that second half, our team defense was much better and we did a better job against Barney," Newman said. "I think having six seniors helped us relax and just come back and play hard in that second half."

While Barney was leading Cloquet, Joe Peterson was knocking down 3-pointers and scoring a game high 29 points for Barnum to keep the game close.

"Peterson is a good player and a good 3-point shooter and he was 5-for-6 from the 3-point line," said Battaglia.

As the game wore on, the Lumberjacks were able to take advantage of its height advantage by beating Barnum off the dribble and then passing to an open player.

While Cloquet was content to pack things in with a zone defense, the Bombers played man-to-man in an effort to contest every shot. Eventually their efforts allowed them to cut into the 'Jacks lead. Barnum pulled within three points before Cloquet was able to grab control and find ways to get to the free throw line, where they outscored Barnum 21-11 from the charity stripe. Cloquet also outscored the Bombers 40-22 in the paint.

"That's one of our goals," Battaglia said. "Not only do we want to win the points in the paint, but to get to the free throw line and we were able to do both of those things." 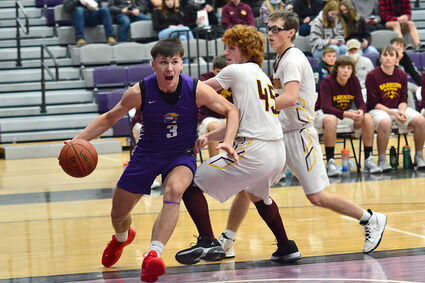 Cloquet's Conner Barney makes a drive to the basket around Barnum's Matthew Berry as the host Lumberjacks defeated the Bombers Friday.

"I think we're capable of contending for the conference and the section titles," Battaglia said. "Right now, we're struggling with depth. Jack Sorenson would've been a starter for us but he tore his ACL in football and will miss the entire season. Reese Sheldon and Kollin Bonneville will both contend for starting spots when they get healthy following football injuries. They are both physical kids who will help us tremendously."

Battaglia said the team is just "six guys deep" with a lone regular reserve in sophomore Joe Bailey. "Joe has really impressed me with his play," Battaglia said. "I'm really worried about our depth in the short term, but when we get to full strength, I like our team."

Evan Gustafson and Hayden Charboneau 15 and 11 points for Barnum. Willie Richardson added six points, with five for Max Moors. Matt Berg added two points to round out the scoring.

"I like our team, but we need to be more consistent," Newman said of the Bombers. "We just have to avoid the long periods of not scoring points and - because we are not very tall - we'll need to work together to play as a whole team the entire 36 minutes."