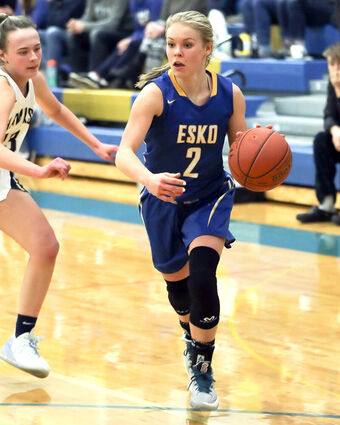 Esko's Jayden Karppinen drives to the basket during the 2021 Coaches Classic tournament championship game with Hermantown. Karppinen was named the girls tournament MVP.

Esko and Hermantown met in the championship game of the Esko Coaches Classic girls basketball tournament last week. The Hawks had opened the tournament with a 68-50 win over Cherry and the Eskomos followed up with an impressive 89-27 win over Columbia Heights. On Wednesday, the Eskomos needed to mount an impressive comeback to win the championship game 52-45

"It is always nice to win our tournament," said Esko coach Scott Antonutti. "I think Hermantown has always come here for the tournament, at least since I've been the coach. I appreciate them always coming."

In the first half, the Hawks didn't show any concern for the host team as they stormed out to an impressive lead. At one point, the Eskomos were down 26-11. But after a couple timeouts, Esko closed out the half on a roll and cut the lead to 30-25.

"Before the game we stressed not giving up wide open looks at threes, and to try and force them to try and beat you off the dribble," Antonutti said. "I don't think we closed out well with shooters and they hit some 3-pointers early."

Although the Eskomos defense improved, they still struggled to make their own shots, but they came through in the final minutes of the game.

"Aila Gabel hit a huge 3 with about three minutes to play in the game that finally gave us a lead, but Hermantown reclaimed the lead, then we took it back and hit free throws down the stretch to finally get the win," Antonutti said.

Jayden Karppinen led the Eskomos in scoring with an impressive 24 points on the way to winning MVP honors.

"Jayden is a special player," Antonutti said. "There are games like the one the other night where it feels like a "quiet" 24 points. She hit four 3's during the game and was 8-of-9 from the free throw line. I think when a player does that at the line, and she does it consistently, it's easy to lose track of the points she has accumulated."

Also scoring for Esko in the win were Avery Kuklinski with 11 points, Kyra Johnson with nine and Gabel with five. Hannah Swanson finished with two points and Kallie Sinnott with one.

The Eskomos won the opening round game over Columbia Heights handily, but needed a jumpstart to get going.

"We were tied at 14-14 and I called time out and told the kids to focus on one particular player for them who had hit a couple of 3-pointers and they got the message," Antonutti said.

From that point on the Eskomos went on a 30-7 run and entered the locker room up 54-21 at halftime.

"Our second half was impressive from a defensive standpoint," Antonutti said. "We only allowed six points in the second half and we really did a nice job of shutting down their offense."

The Eskomos were led by Kyra Johnson with 24 points, followed by Avery Kuklinski with 15, Jayden Karppinen with 14. Both Kallie Sinnott and Aila Gabel scored 11 points each. 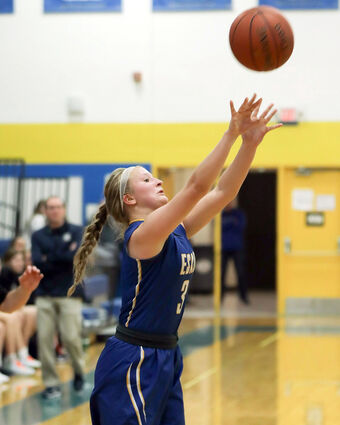 "Early in the season we struggled with giving up too many rebounds and not playing well on defense," Antonutti said. "We are short so we were getting out rebounded. We have refocused on defense and rebounding and we are continuing to improve and our offense seems to be humming along as well."

Rounding out the scoring for the Eskomos were Emily Rengo with four points, Jordyn Randa and Kaitlyn Adkins with three points each and two each for Kaitlyn McConnell and Hannah Swanson.