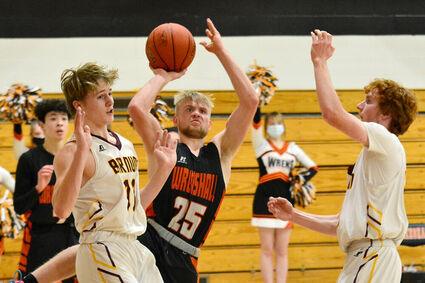 Wrenshall's Austin Larva lines up a shot between Barnum defenders Joe Peterson, left, and Matthew Berry Monday night in Wrenshall. Barnum got by Wrenshall after turning up its defense to neutralize the Wrens.

A change in the defensive scheme helped Barnum blow open a tight game against the Wrens Monday night in Wrenshall. The Bombers went on to record an impressive 75-36 win over a good Wrenshall squad on the road.

"The first half of the half, both teams were trading baskets and the score was even. Then we switched up matchups defensively and we were able to somewhat contain Corey Despot," said Barnum coach Rich Newman. "We were also able to get some transition points off turnovers and missed shots."

Early in the game Despot was on fire for the Wrens and poured in 12 points before halftime, many coming prior to the midway point in the first half.

"Despot is a solid player," Newman said. "In the beginning we were unable to match his physical play and Wrenshall was doing a good job getting him the ball in scoring position. Our team defense improved and we were able to slow him down."

Following the defensive switches, the Bombers were able to ride a wave of fast-break baskets which led to some quick layups as they pulled away. One of the recipients of those transition points was Joe Peterson, who racked up 22 points to lead Barnum in scoring while

Evan Gustafson also had an impressive night with 18 points.

Despot finished with 18 points to lead Wrenshall and Austin Larva added 11. Also scoring for the Wrens were A.J. Olesen with five points and Evan Wyman, who added two.

"I felt it was a good game for our kids," Newman said. "We were able to get the game going and our kids responded by taking good shots and playing with energy and effort. I like our team. We are a bit undersized and lack a post presence, but the kids work hard defensively."

Also scoring for the Bombers were Willie Richards with 10 points while J.J. Stevens and Hayden Charboneau scored six. 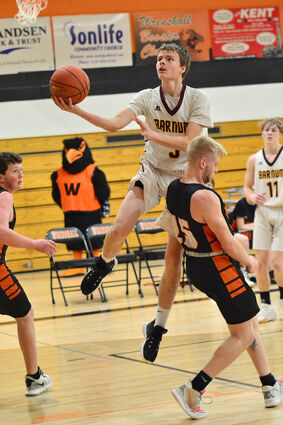 Barnum's J.J. Stevens goes up for a shot over Wrenshall's Larva in the Bombers 75-36 win.

"We have had a lot of ups and downs this season," Bartczak said, noting how the Covid-19 virus has rippled through programs. "With this year we never know who we are going to have and who our opponents are going to have. Our best games come when we are working together as a team on both ends of the floor."

On Tuesday night, the Wrens bounced back with a solid game despite losing 80-73 to Two Harbors in Wrenshall.

"I thought we played much better as a team on Tuesday on both ends of the floor," Bartczak said. "We came out ready to play as well. As a team we shot much better and Despot had another good game with 20 points inside the paint."

The Wrens went 8-9 on the season while the Bombers improved to 11-5 following the win over Wrenshall.