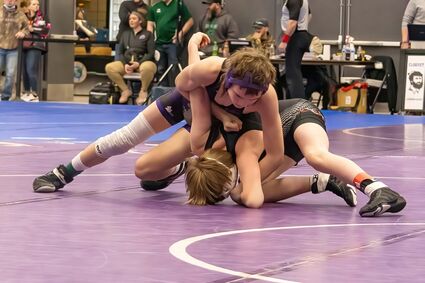 CEC'S Aiden Theisen applies an arm bar on Jacob Benson-Vick of Aitkin Saturday in Cloquet. Theisen was the top finisher for the Lumb- erjacks as they hosted the Section 7AA tournament. He placed third, just missing a state bid.

For the second time in the history of CEC wrestling, the Lumberjacks played host to the Section 7AA wrestling meet last weekend. The meet featured the top 135 wrestlers on 12 teams in the section vying for the top two spots in each weight class and a chance to wrestle in the Minnesota state high school wrestling tournament this weekend.

"The crowd and the atmosphere were amazing all weekend long," said CEC coach Al Denman. "Imagine four mats of wrestling with eight wrestlers going at it all at the same time. You have parents, fans, coaches and others all yelling for their wrestler all at the same time. It is crazy intense and until you've been to an event like this you can't imagine how crazy it can get."

The top finisher for CEC was seventh-grader Aiden Theisen, who turned in a scrappy performance at 106 pounds and took third place in his weight class.

"Aiden raised some eyebrows this weekend," Denman said. "He is very athletic and he has certain skill tendencies and has been gifted certain abilities and attributes that will almost certainly make him a multi-state entrant and even a place winner at state in the future. He just has a natural sense of what is about to happen and then can use that in his favor. You can't teach that."

CEC's Bohdon Fjeld, at 132 pounds, also had a strong weekend and finished in sixth place. His performance included an impressive pin in the consolation semifinals.

"Bo caught a kid in a vulnerable position and pinned him," Denman said. "He was aware enough and savvy enough to realize what he had and he went for it. Even great runners can make a mistake and recover to win, but in wrestling, one mistake will cost you a match and Bohdon has really improved against other top wrestlers."

CEC's three other varsity wrestlers - Alex Comer at 113, Warren Hietela at 145, and Carter Horvat at 170, did not place in the tournament.

"Hietela has been in a bunch of barnburners all year and Comer picked up the sport fast and is sorting out what wrestling is all about, but both of them have a lot of potential," Denman said. "Carter (Horvat) was off for a full year with a knee injury and there are many kids who would not be wrestling if they had been through what he has. At 170, he is wrestling against men and as a sophomore he more than held his own."

Hietela and Comer are also sophomores. Denman said they and the other wrestlers on this year's squad showed improved skills and confidence as they lay the base for a strong program in the future.

"We don't have a lot of numbers so in every match we go in we are already behind," Denman said. "In almost all statistical categories we are better than our opponents except in the win-loss record and the only reason we are not is because we are not fielding a full team. The guys we have wrestling are hanging with all the other teams." 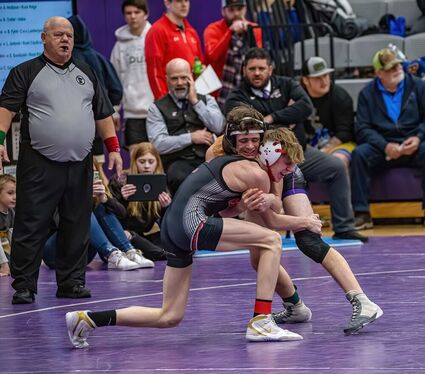 CEC's Bohdon Fjeld couldn't get past James Erickson of Aitkin in the fifth-place match.

One of the unique features in wrestling is the ability of the wrestler who finishes third to be able to challenge the second place wrestler for what is called "true" second - but only if they haven't wrestled already. Six times on Saturday, the third-place wrestler challenged the runner-up and finished second - giving that wrestler a state tournament berth.

"That is by far the toughest thing to do in wrestling," Denman said. "To finish a match for the championship that you lose and then to have to defend your position in second to go to state mentally is so tough."

Theisen didn't get the chance, as he had lost to the second-place finisher in the semifinals.

Now all that is left for CEC wrestling is to get more kids to decide they'd like to try the most demanding sport of all.