'Jacks a shot away from an upset 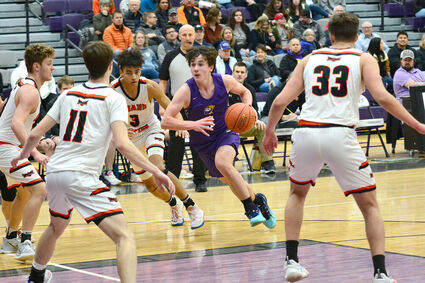 Cloquet's Kollin Bonneville drives into a host of Grand Rapids players Friday night in a playoff win in Cloquet. Cloquet moved on to play Hibbing in the Section 7AAA title game Tuesday.

The Lumberjacks faced Hibbing, the No. 1 seed of the Section 7AAA boys basketball tournament, for the third time this season Tuesday night in Hibbing.

The third time wasn't a charm for Cloquet as they were downed 56-53 in a back-and-forth contest.

During the regular season, the two teams split. After losing by 22 points Dec. 17, the 'Jacks rebounded by winning by 6 points Feb. 10 in Cloquet. The deciding game of the series would prove to be every bit as exciting.

In Thursday's game against Hibbing the Lumberjacks struggled in the first half to put the ball into the basket and fell behind at halftime 33-23, as Ayden McDonald led his team with 14 points at halftime.

"Scoring hasn't been an issue all season for us, but it was weird ... we just couldn't get anything to drop in the first half," said Cloquet coach Steve Battaglia. "Despite being down by 10, we knew that we'd score in the second half; it was just a matter of what we could do on defense."

The Lumberjacks came out strong to start the second half and cut the Bluejackets' lead to 43-42.

That's when things got crazy.

McDonald slipped in for a layup and then a steal to push the lead back to 47-42. The 'Jacks again fought back as Caleb Hansen hit a 3-pointer, and Marco Mayorga - playing with four fouls - fought underneath for a bucket to tie the game at 47-47 with a little over four minutes remaining.

"Our guys gave a great effort all game long on defense," said Battaglia. "There was a lot going on and we had to use a lot of our timeouts to try and get things right."

With Hibbing up by 3 points at 50-47, Cloquet's Alec Turnbull tied it with another 3-pointer for the 'Jacks. Following Turnbull's shot, McDonald got inside for a basket to make it 52-50. With under a minute and a half left, McDonald got a rebound and a putback to make it 54-50, but Caleb Hansen came down and quickly nailed a 3-pointer to make it 54-53 with 49 seconds left.

At that point Hibbing called a timeout and eventually, after a couple of free throws, put the Bluejackets up 56-53, leaving the Lumberjacks one last chance to tie the game. With nine seconds remaining, the 'Jacks got the ball to Conner Barney, only to have his last-second shot be just off the mark, giving Hibbing the win.

Alec Turnbull led Cloquet in scoring with 21 points, while Caleb Hansen scored 13. Conner Barney and Marco Mayorga each finished with 8 points, and Kollin Bonneville added 3 points to round out the scoring.

Cloquet gained the title game by dispatching Grand Rapids last week 50-47 on Friday night in a game in which the 'Jacks allowed only 18 points in the first half.

"We were pretty good defensively to start, but got a little sloppy as the game went on," said Cloquet coach Steve Battaglia. "The game was played at a slow pace, which was what they wanted to do, as they aren't an overly offensive team."

Key to the win was the Thunderhawks' attempt to take Cloquet scoring star Conner Barney out of the game offensively, but Barney used the opportunity to dish the ball off to others who took up the scoring slack.

"They really jumped to him every time he touched the ball," Battaglia said. "Conner has gotten better at being a distributor when teams are committing extra resources to try to stop him." 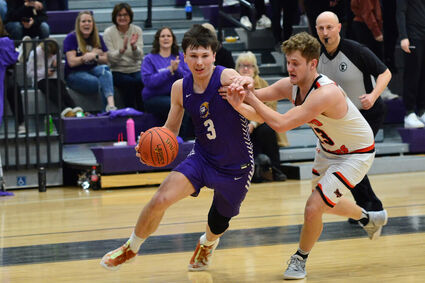 One of the beneficiaries of that was Caleb Hansen, as the senior guard scored 17 points to lead Cloquet.

"He's been good most nights this year for us," said Battaglia of Hansen. "He moves well and can score in transition and he shoots the three at close to 40 percent."

Cloquet ends the season with a 16-12 record and graduates five seniors, including Turnbull, Hansen, Barney, Spencer Teitelbaum and Orville Councillor. The Lumberjacks were also without senior Jack Sorenson all basketball season and missed his leadership after he was injured during the high school football season.