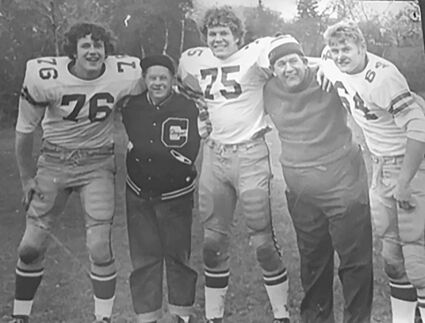 At Cloquet coach Rol Bromberg's recent visitation at Nelson Funeral Care, I was astounded by the preeminent collection of athletic and family photos on display. Undefeated football teams, track regional relay champs, Brom and his wife at Twins games, hugs with grandkids, birthdays, his own high school and college awards, the dedication of Bromberg Field. One particular picture brought a twinkle to my eye: a photo of Bromberg and Dickie Eklund out on the Athletic Park football field, dated 1979.

Dickie was one of the more well-known dignitaries in Cloquet. He was not elected, a part of the clergy, or awarded medals for heroism. His friendly face just followed Cloquet high school sports and Minnesota team's unwaveringly. From my observations, Dickie was likely intellectually disabled, but it didn't matter. He and Ray Poirer were special people with special needs, and were highly revered as friends by many Cloquet citizens and athletes. Both are dead now, and I decided on some personal reflections on these two as well as revisiting thoughts from those who were even closer to Ray and Dick.

Dickie's connection to Cloquet football and sports went back to the 1950s, pre-Bromberg coaching days. Chic Oist was the Cloquet coach at the time. Chic's daughter Linda Erickson, who works at the Pine Knot newspaper office, said that her dad "just loved Dickie." He'd pick him up for games and even let him practice with the team, telling his players to occasionally let Dickie run for a touchdown, she said.

Mike Bromberg, Rol's son, said Coach Oist gave Dick a used helmet, jersey, and football pants to wear for these special practices. Linda stated her dad got into a "conversation" with school administration because he'd allow Dickie to announce part of the football games from the press box microphone. Chic really cared for and admired Dickie.

I'm not sure, since I wasn't personally a football player, whether it was coaches, players, parents or fans who one season gave Dick his own Cloquet purple and white school letterman's jacket (in photo below) with his name and a football letter on it. Whoever did, thank you, because as an observer, I could see how proud Dick was of that jacket for many years.

I first met Ray Poirer when I was in the on-deck circle at Athletic Park for a Scanlon vs. Two Harbors junior high baseball game. Funny that I can remember the exact moment, but Ray made that kind of impression on people. It was way back, when Athletic Park had dugouts and a huge wooden grandstand.

Ray, with his expressions and a trademark narrative chant, came with his bike right into the on-deck circle and definitely wanted me to hit a home run. I hit a double, so he was still happy with me. As the years went on, I became friends with Ray. He was a regular at basketball practices when I was a high school senior. He'd throw out Tootsie Rolls and other penny candy he probably picked up at the Public Market to players diving on the floor, trying to retrieve them. All players would then cheer for Ray as he tried underhand basketball shots from deep in the corners. He was a good shot.

In interviewing Jack Hagen, who worked at the Pinewood Learning Center in Cloquet for many years, I found out he assisted Ray Poirer for extended periods of time. Pinewood is dedicated to working with individuals with intellectual and physical disabilities to assimilate them into the communities where they live and find regular employment as appropriate.

For a while, Jack would spend a couple hours a day with Ray. Ray lived semi-independently, and chores with him could include grocery shopping and meal planning, personal hygiene and doing laundry, transportation, scheduling, and so on. Although it was sometimes tedious, he said working with Ray was a pleasure. He said he had to tell Ray to turn down the polka music he loved and played so loudly in his apartment, as the neighbors sometimes complained. Ray was always happy and a good competitor. It takes a lot of patience to work with these special children and adults, I'm sure, and here's a salute to Pinewood and all its staff. Thank you.

Another of my favorite Ray stories, from when I was probably 30 or so: we had played a fast pitch softball game at Blackhoof Valley south of Carlton. I realized I had forgotten my catcher's mitt at the field so I called Sherm Swanson, the Blackhoof coach. He told me he had picked it up and to meet him at Len's Elmwood Inn in Atkinson to retrieve it, and that he and his brother's band were playing there that evening.

When I opened the Elmwood door, Ray was one of the first to greet me. He acted like I hadn't seen him in 100 years and had come just to visit him. His job at the Elmwood was to do dishes, peel potatoes, clear tables, other odd jobs ... and he sang. I had to stay, Ray insisted, to hear him sing "Just Because." No stuttering, no stammering, just like the country singer Mel Tillis when he sang, Ray was perfect. It was one of Ray's favorites and, obviously, one of the top 10 songs requested in the Elmwood Inn and in Carlton County history.

Len Voikofski (who died in 2004) must have been part saint, for he often transported Ray to the Inn, gave him jobs, and then transported him home after closing. Len also owned Len's Melody Music shop on Cloquet Avenue, played the accordion, and hosted the polka party music on WKLK radio (prior to Dwight Cadwell) ... no wonder Ray loved polka music.

Most of Dick's and Ray's friends were males - but then, I also thought of the Cloquet bowling alley. Ray was a regular, played in leagues, and also bowled as a sub. He'd watch women's leagues too and developed friendships with the regulars over the years. He'd sit and eat popcorn, laugh and give advice. He'd also show off his bowling wristband with the 278 engraved on it - his high game. Jerry Pollard and the gang of Southgate Bowl equipped Ray for bowling and probably kept the "free" popcorn there for his enjoyment. Many Cloquet merchants would buy Ray and Dick bikes with baskets, offer jobs and transportation, free movie tickets, and provide food, snacks and meals. It does take a village. 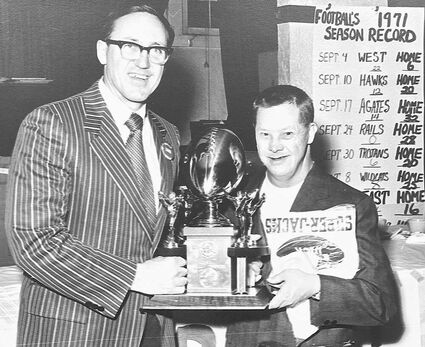 I struggled a bit on how best to conclude this article. I'm sure Ray, Dick and others were teased, chastised and berated by kids and adults, but also shown a lot of love and concern. Many Pine Knot readers, undoubtedly, have their own stories of these two gents. I asked my golf partner and master's in psychology degree holder, Jeff Hallback, if Cloquet and Carlton County's response to and support of Dick and Ray was appreciated by them and appropriate. Jeff worked many years with the Duluth public schools finding employment for the disabled. He gave me a formal mental hygiene answer that I took as a yes. Certainly, there are many examples of ongoing support, love and concern for those needing assistance. Thanks to all the caregivers, and please continue.

Steve Korby's interest in writing goes back to when he was in fourth grade and editor of the Scan-Satellite school newspaper in Scanlon. He welcomes ideas for human interest stories and tales regarding Carlton County residents, projects, history, and plans, care of [email protected]