On The Mark: Portraits with a camera 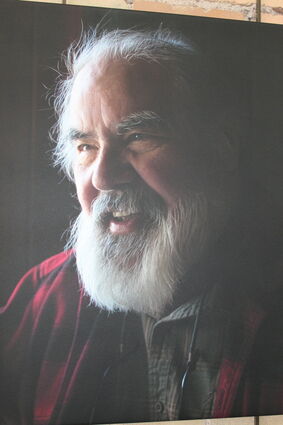 Another captures the late Ron Winters dancing in the arena at the Grand Portage Band of Ojibwe Rendezvous powwow.

Yet another features the late Jim Northrup of the Fond du Lac Ojibwe Reservation. "He was a father figure to me, my cultural mentor," Vainio said. "He loved sharing Anishinaabe traditions, stories, laughter, and lessons with me and others. He also put up with me taking so many photos of him. He would tell people I was 'The Official Jim Northrup photographer.'"

Also included are several photo portraits of the artist Carl Gawboy, painting or talking in his front room on the shore of Lake Superior.

Vainio is African American and a direct descendant of the Grand Portage Band of Ojibwe.

"When I take portraits such as these, I feel a deep, familiar connection to the person. And not just while taking the photograph, but also after I have them printed. I see a reflection of myself in a lot of them, figuratively. The subjects are often participating in something larger than themselves - something that has meaning for them culturally, spiritually, communally."

Vainio began photographing for the University of Wisconsin-Superior Multicultural Affairs office in the late 1990s. Her boss bought an Olympus camera for taking photos of campus activities.

"I've taken photos of so many events over so many years. It helped me polish my photography. In 2008 or so, my husband Arne bought me a Canon Rebel camera.

It was a high-end camera with attachments, "the biggest I'd ever used. I started taking photos at powwows and rallies in Duluth, including African American celebrations and cultural events."

Vainio said Pine Knot editor Jana Peterson was the first to publish one of her photos, as editor of the Pine Journal in 2011. Her first gallery show was a group exhibition featuring Minnesota photographers of color. Her images of powwows were shown alongside images by Duluth native Wing Young Huie and Bill Cottman at the Pillsbury House's Obsidian Arts gallery.

"My photographs were the only ones that represented Native culture," she said.

Vainio's first solo show was mounted at the University of Wisconsin-Superior library. "They hung 12 of my photographs for an entire semester. That started my career."

As Duluth's American Indian Community Housing Organization (AICHO) emerged within the previously shuttered YWCA, its director, Michelle LeBeau, invited Vainio to hang her photographs there. It was her first official solo exhibition.

"I chose portraits honoring our traditions: photographs of powwow dancers and first-person narratives on why they dance," Vainio said. Soon after, Indian Country Today published a three-page story on her powwow photography.

Vainio's photography slowed down during the Covid-19 pandemic. "Before Covid, I wanted to be with lots of people. It was easy to be extroverted," she said.

She wanted to photograph rallies that called out for justice to police killings of Black men. But due to the pandemic she resisted her urges to go. Now she's doing more photo shoots, like those of Carl Gawboy in our current exhibit. Vainio's portraits were featured in an article during the pandemic on Native photographers. The face masks worn by the dancers will always stamp the era the photographs were taken.

She's proud of photos she took of Patti in a jingle dress and Herb Fineday, a traditional dancer, both wearing face masks.

As she was packing up to leave the gallery last week, Vainio said, "It was pure joy to spend some time with you today in your space. Thanks for allowing me to exhibit along with the other artists for this show." 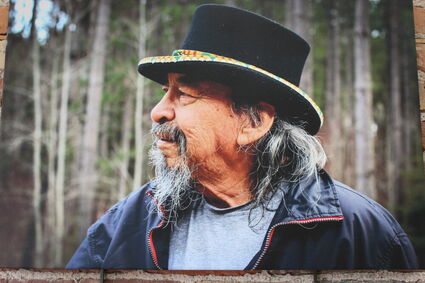 Come to the Knot Gallery between 5 and 7 p.m. Friday, April 8 for a free artists reception and portrait show opening (and a book signing) at the Pine Knot Gallery, inside the Pine Knot News office at 122 Ave. C, Cloquet. Enjoy refreshments, good company and wonderful local art and artists.

Columnist Ann Markusen is an economist and professor emerita at University of Minnesota. A Pine Knot News board member, she lives in Red Clover Township north of Cromwell with her husband, Rod Walli.