On the Mark: Students hit stage with song 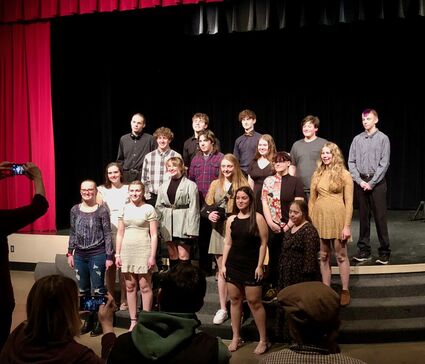 It was an exciting night in the Cromwell-Wright school auditorium last Thursday. It began with 11 of our high school choral students singing their hearts out in solos, duets, and ensembles. The solos included two operatic pieces, both in Italian.

Andrea Pocernich sang “Che Fiero Costume,” an Italian aria that furiously castigates Cupid for his machinations as a “tyrannous mentor.” Lithuanian exchange student Augustas Poskus sang the powerful “Vittoria, Mio Core,” celebrating the protagonist’s victory over a false love. Alaina Lind soloed with “Drink to Me Only with Thine Eyes,” and Aurora Gervais, our community’s competitor in Minnesota Sings in 2021, soloed with a dreamy “Shenandoah.”

In a lovely innovation, MaryRose Varo, the school’s vocal teacher and a musician and composer herself, invited the participants to a dinner at the school beforehand — lasagna, salad, soft drinks and iced tea — prepared with the help of her husband, Roger Varo. That helped us all to diffuse antsy nerves before the crowd began to gather.

It was a full house in the school’s small auditorium. The recital kicked off with the singers surrounding the audience and delivering “By the Waters of Babylon.”

We had rehearsed often, but I remained a nervous amateur pianist. My hands are small, and though I’d been practicing for weeks, some stretches were both fast and demanding, with five or six keys played at once.

We had competed the prior week at the state Music Contest — held annually for high school choir students — this year in Barnum. All of our students did exceptionally well, with seven out of eight soloists, four out of four duets and the boys’ ensemble all taking home medals with superior scores. We had wonderful judges who gave the singers excellent feedback and coaching.

MaryRose carefully chooses the songs for each soloist or ensemble. This year I had an opportunity to watch her coach, often one-on-one, two or three mornings a week in her classroom. With some, she would work on breathing, which I learned plays all kinds of roles in one’s delivery. In other cases, she might decide that a student could sing in a higher key or would be better off in a slightly lower one. She gave me piano pointers too: on timing, volume, and transitions. She often seems as much an acting coach as a singing coach.

In a special treat, Michael Zoeller on piano and Augustas Poskus on guitar teamed up to sing a rendition of “Revenge,” by American rapper XXXentacion.

The evening’s recital handout contained a paragraph on each singing participant. All of them are thoughtfully crafted. One of my favorites is Michael Zoeller’s.

“This is Michael’s sixth year developing his vocal and sectional leadership skills in our choir. Over the years he has performed in several ensembles. This is his first year medaling in both an ensemble and for his solo. His favorite part of choir is spending time with the people in it. Michael enjoys history and hopes to be a teacher one day. He would like to thank his mom and dad for putting up with his constant singing.”

MaryRose’s words regarding this year’s senior high choir focused on how hard-working, teachable and talented the Cromwell-Wright students are as a group, each one taking individual ownership of their own craft and learning.

“It’s been a delight to teach them and to listen to their beautiful voices each day,” she wrote. “It’s a real encouragement and blessing.”

For me, it’s been an intriguing if challenging collaboration. I’m often struggling to reach six or seven notes at a time, sometimes at a racing tempo. It’s been a pleasure to watch and hear the students grow into their songs and deepen their expression, be it heartbreak, anger, or joy.