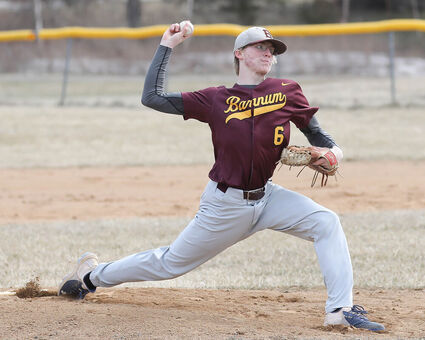 Caleb Hautajarvi pitched a masterful game for Barnum. The junior handled the Bulldogs with a 12-strikeout performance.

Local baseball teams have had a tough time getting onto the diamond this spring, but last Thursday Barnum was finally able to host a game as they downed neighboring Carlton 6-1.

Leading the way for the Bombers was pitcher Caleb Hautajarvi, who pitched a masterful game. The junior handled the Bulldogs with a 12-strikeout performance.

"Caleb did that all last year as a sophomore for us," said Barnum coach Tony Bender. "He's the best pitcher we had last year, he throws well, has good pitch selection and velocity."

Carlton struck first in the second inning to nab a 1-0 lead.

"Caleb is real solid," said longtime Carlton coach Ryan Schmitz. "He mixes his pitches well. He throws harder than most of the pitchers that we see and he had good command on Thursday, especially for how cold it was."

Eli Gilbertson was a big key to the win for the Bombers with a great effort at the plate, going 3 for 3, with five stolen bases, two runs scored and two RBIs.

"Eli is a freshman infielder or utility player," Bender said. "Really, we can put him anywhere. He is a solid player and leads off for us and knows the game well and plays tough."

After giving up the lead in the second, the Bombers managed to even things up in the top of the third inning when Gilbertson singled and scored. Barnum pulled ahead 3-1 in the fifth inning with two runs off Carlton starter Brody Vernon.

"That was Brody's first varsity start after relieving in several games last year," Schmitz said. "He did a fantastic job. He kept us in the game, kept their hitters off balance and, again, had pretty good command of his pitches, for having to deal with how brutally cold it was at Chub Lake."

"We had faced Hautajarvi in the playoffs last year and knew he was good, and that an extra year probably wasn't going to make him any worse," Schmitz said.

"So on only the second day we got to hit outside all spring, it was a difficult draw to face a real good arm like Caleb."

The fifth inning proved to be an important one for Barnum, as the Bombers scored a pair of runs to take a 3-1 lead. Eventually, Barnum tacked on three more runs for the 6-1 win.

"I am pleased with some things, and not others, right now," Bender said. "If we had six or 10 games in, I could tell you what we need to work on, but right now it's pretty much everything." 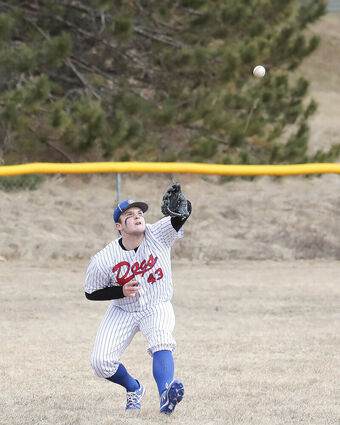 Carlton's Nicholas DeVriendt-LeDoux battles the wind to make a running catch in left field during Thursday's baseball game with Barnum.

Despite the fact that both teams have barely seen a field this spring, the players did a good job.

"Really, I was surprised at how well we played, and Barnum played for that matter," Schmitz said. "In that kind of weather, it's real easy for things to fall apart, but it was a relatively clean game. There were no big innings, they got a few more hits and got them at the right time, but all around it was a pretty well-played game between a couple teams that had only been outside a few times."

The Bombers connected for seven hits with three coming off the bat of Gilbertson, while the Bulldogs had two hits with both of those coming from Gunner Fadum.

Like all teams in the northern half of the state, both schools will have a busy May with many games to be played and made up.