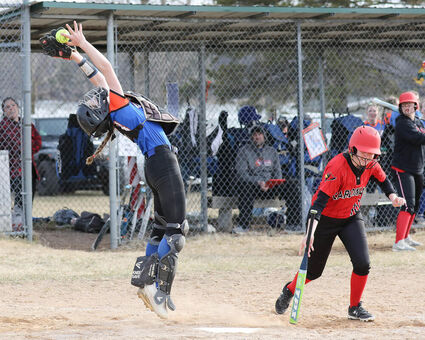 With improved weather, local softball teams are playing catchup to get in as many regular-season games as possible before the playoffs begin right around the corner. The Pine Knot also spent some time this past week catching up with softball coaches at four local smaller schools on how their teams have progressed so far this season.

Entering the week, the Raptors sported an impressive 8-4 record and are showing signs that the cooperative program is going to be a team to be reckoned with as the playoffs loom on the horizon.

"The first couple of games we struggled with our defense, but since then we have been very strong in that department," said Brent Pokornowski, who is a co-head coach alongside Anna George. "We didn't move to the ball well in those first games, but since then we've really focused on getting our feet moving, and it has made a difference."

A big factor in the Raptors' strong start has been the pitching of Abby Mitchell who, at the start of the week, had 135 strikeouts to go along with just 24 walks in 11 games.

"We are beyond happy with how she has pitched," said Pokornowski. "She added a drop ball and now has five pitches as a sophomore that she can throw for strikes."

Hitting-wise, the Raptors are getting strong early-season performances from Carly Parker and Janea Sjodin as well as excellent hitting and work behind the plate from catcher Eliza DeCaigny.

In the outfield, the Raptors have been getting impressive play from all of their fielders, with Lacy Lekander leading the way.

The Cardinals entered the week on a two-game win streak and an overall record of 3-5.

"One of those wins was a strong defensive game against MIB, which helps us to gain confidence and momentum going into the last week of the regular season," said Cards coach Kari Olesiak. "Our schedule this week is basically back-to-back games through Saturday, May 21, to make up for the horrible weather we've had until recently."

The bad weather this season has had a mental effect on the squad, as it has on most other Northland teams.

"No one likes to be indoors for practices as long as we were," Olesiak said. "By the time we could get our first game in, we had only practiced outside once on the football field, since it was not dry enough yet on our softball field. Being crunched for time has also made it so we couldn't reschedule games with some teams, and that is disappointing."

The Cardinals numbers have swelled to the point that they have now been able to add a junior high team this season, to go along with a varsity squad.

"Our starting team juggles between two seniors, a junior, two sophomores, a couple of freshmen, an eighth-grader and two seventh-graders. Since the start of the season we have been testing out players, finding the right combinations, now that we have more numbers," Olesiak said.

Jill Anderson, who was pegged to be the main pitcher this season, ended up with a nagging injury, which caused the coaching staff to make some moves as well.

"At the start of the season, I would have told you that Jill Anderson would be seeing most of the time as our pitcher, but after a muscle pull we have been using Vaida Blomquist, a freshman, for a majority of our games," Olesiak said. "She just keeps getting better every game and has been the one to get us our three wins. She has mental toughness and game smarts that got her a no-hitter last Friday against Floodwood."

Top hitters so far this season have been Jill Anderson, Karina Olesiak and Ellie Anderson.

"This last week of the season will be tough for us; we are facing some good teams," Olesiak said. "I hope we continue to play like we have been, and end strong."

After a slow start to the season, the Bombers have bounced back to a 6-4 record entering the final week of the regular season. Sporting five senior starters, the Bombers are starting to show that early-season expectations of a big year were not unfounded.

With the warm weather the Bombers bats are coming alive, and last weekend the team bashed out three home runs in games against MIB and Nashwauk-Keewatin. Lacy O'Leary had two homers on the weekend and Mendota Castonguay also belted a home run.

"Mendota has been our starting pitcher for six years now," said Barnum coach Dustin Collelo. "She's been rock-solid, but we are lucky because we have three pitchers. Most Class A teams are lucky to have one pitcher, and we have three of them."

Joining Mendota in the circle this season are another senior, Kayelea Poirer, and eighth-grader Alizondra Collelo.

"It is a luxury to have three pitchers," said coach Collelo. "With how condensed the schedule is right now, it is nice to have the numbers we do in the circle."

Leading the offense for the Bombers are O'Leary, Castonguay, Jacinda Wright and Dana Buell.

The Panthers have a new head coach in Merle Kelley. The longtime local summer coach is taking over a team that is three years removed from their first state tournament trip.

"There was a lot to figure out, but now that everything is organized and we are out playing ball, it is going pretty well," said Kelley. "We have a positive, hard-working group with four hitters batting over .400 for us."

The team is led by two seniors, Olivia Spikeberg and Ellie Preston. 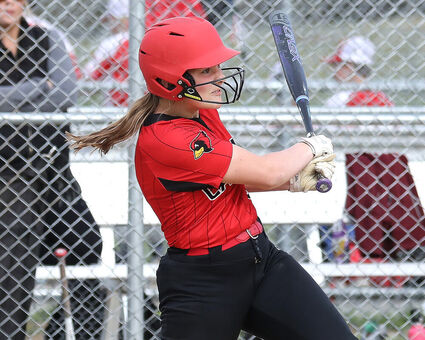 In the circle, the Panthers are riding the strong arm of Svea Snickers. The team picked up an impressive win over a very good Silver Bay team last week.

"We went up to Silver Bay and beat them 8-2," said Kelley. "Svea pitched awesome and has been good all season for us."

Kelley is also seeing growth in seventh-grade pitcher Maya Vanderscheuren, who is tall and has a lot of leverage to work with.

Rylee Young has been the main catcher for the Panthers, and the team has gotten impressive defensive play from Lily Josephson.

"Young is so good, she is quick and fast and has a great arm," Kelley said. "Josephson has been impressive at shortstop for us."