It's baaaack. After the Covid-19 pandemic led to a full-scale cancellation of Cloquet July Fourth events in 2020 and no activities at Veterans Memorial Park in 2021, organizers are planning for a return to normal in 2022.

Like last year, there will be a parade and fireworks, plus the Sawdust 5K and 1-mile race in the morning, a car show at the Northeastern Hotel and Saloon and a 3-on-3 basketball tournament at Pinehurst Park.

For the first time since 2019, there will also be activities in Veterans Park following the 11 a.m. parade and an outdoor movie in the park before the fireworks, also at Veterans Park.

"We really want to make July Fourth the place to go for families," said Jana Peterson, Fourth of July celebration co-coordinator and longtime July Fourth volunteer. "Bringing people back to the park is really important. Without that community gathering spot, it kind of ripped the heart out of the festivities."

The afternoon activities at Veterans Park will be familiar and mostly free. The Dash for Cash, when kids dig in sand or sawdust for quarters, will return, and so will the pie eating contest. There will be family-friendly fun ranging from the popular balloon toss to a three-legged race, wiffleball games and a variety of bouncies and inflatables from noon to 4 p.m. After that, things will slow down for a few hours before the outdoor movie starts around 8:30 p.m.

"We're hoping to have musicians busking at the park, and other entertainment - music, magic and juggling and more," said co-coordinator Ivan Hohnstadt. "We're still looking for arts and crafts vendors, and anyone who wants to entertain.

Fundraising to pay for the daylong event is going well, Hohnstadt said, adding that the committee has raised enough to pay the nearly $16,000 bill for the fireworks through donations from local businesses, organizations and individuals. Top donors so far include Sappi and Holy Smokes Catering, which donated $2,000 each. At the $1,000 level are Visit Cloquet, the Cloquet Eagles, Minnesota Energy Resources, and Wood City Motors. Kwik Trip and Upper Lakes Foods both donated $750, Enbridge gave $500, and $800 is coming from the Carlton County "community get together" grant. Many other businesses and individuals have donated anywhere from a couple of bucks to hundreds of dollars.

"It's great to see all the people, organizations and businesses pitching in to make this happen," Hohnstadt said. "But we're not done yet. We still need to pay for all the activities and entertainment at the park and things like portable biffies."

The food trucks will return to Veterans Park as well, including mini donuts, corn dogs, cheese curds, kettle corn, ice cream and more. Holy Smokes will offer smoked meat sandwiches and Julie's Eggrolls will be there, along with other local favorites.

Paid attractions include the popular bungee trampolines, along with helicopter rides that take off from a lot next to Veterans Park, flying over the city (but not the festivities).

Look for a flyover at the start of the parade, courtesy of the 148th Fighter Wing of the Minnesota Air National Guard of Duluth as well.

"Fingers crossed, the weather and the pandemic will be kind to us," Peterson said.

Julie and Sam Jacobson have taken over the Sawdust 5K race and the 1-mile race before the parade from the founders of the July Fourth races, Jeff and Alyson Leno. The Jacobsons said they aren't changing anything about the 11-year-old 5K race, which begins at 8 a.m. July 4 at Pinehurst Park, with a route that takes runners up and down the hills in the heart of Cloquet. Runners will still have the option of doing the free Jimmer 10K as well, which involves running the 5K race, then reversing course for a total of 10 K. Find out more and register for the Sawdust at http://www.tempotickets.com/sawdust2022. Cost of registration is $35 through June 28 and $40 after that.

Paul Cameron is again organizing a 3-on-3 basketball tournament at Pinehurst Park starting at noon on July Fourth. It's a popular event for players and spectators, and a great place to watch some fun and intense half-court basketball games. Each team can have four players.

The double-elimination tournament is for all ages, Cameron said, noting that they saw more middle school teams come out in addition to the older players last year. There is no cost to play, but T-shirts will be available for purchase at the event to help pay for the event.

This is the third annual 3-on-3 basketball tournament, an idea dreamed up by Cameron and company because they just loved the city's new courts at Pinehurst so much.

There will be awards for "best youngins," tournament champs, tournament MVP and "most drip," Cameron said. "That could be the way they play, or the way they show up and dress."

Cameron said he's gotten lots of help this year from Cloquet's Jacob Diver, he said. More volunteers are welcome. Find out more via Instagram @pinehurstcourts or on Facebook at https://fb.me/e/26nU1UXBC.

Bert and Judy Whittington will hold their 19th annual Fourth of July car show at the Northeastern Hotel, Saloon & Grille on Dunlap Island in Cloquet. The show runs 10 a.m. to 3 p.m. There is no entry fee and no classes. There are trophies and plaques for best of show, people's choice and various "best" car categories, including Ford, GM, Mopar and Open Class (unrestored, Hot Rod, other corporations). Trophies will be awarded at 2:30 p.m.

Entrants get free coffee, toast and rolls during setup 8-10 a.m. and there will be grilled burgers and brats available for purchase along with a full bar inside and beer outside.

Whitington said the fun won't end with the car show. Crimsen Tied (Ryan and Crimsen Hanson) will play 6-10 p.m., and all are invited to stay for the fireworks that follow.

In addition to the Facebook page at Cloquet 4th of July Festival, there's a new website at cloquetfourthofjuly.com, where people can check out the schedule, download parade entry forms and quickly link to registration information for the Sawdust 5K and the 3-on-3 basketball tournament.

The push is on, Hohnstadt said. 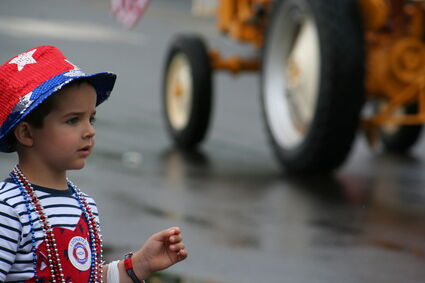 "We have only a few weeks left to put the finishing touches on this, so if you've been planning to donate, please do so," he said. "Every dollar counts. If every resident in the city of Cloquet contributed $2.50, the event would be paid for."

Donations can be mailed to or dropped off at the Pine Knot office at 122 Avenue C in Cloquet; address envelopes and write checks to Cloquet Fourth of July.

Editor's note: The Pine Knot News was hired by the city of Cloquet to coordinate this year's festival with the July 4th committee. Read more about that on Page 8.