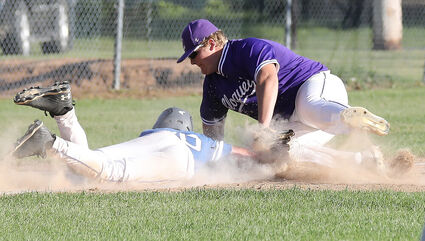 "It is an unusual summer because we don't have any seniors playing on the team," said coach Tyler Olin, who also coaches the Cloquet High School baseball team. "They guys we have out want to play and our entire team is juniors and sophomores and even freshman. It is pretty rare not to have kids who have graduated, so we have a young group of kids."

Last week Cloquet fell on Wednesday and Thursday to Denfeld and Hibbing before rallying to take an impressive 18-8 win over South Ridge Friday.

"Summer is all about at bats, innings, and playing different positions and developing players," said Olin.

Cloquet carries a roster of about 14 players, with many of those players being shared by the Legion and VFW teams. Legion team rosters generally consist of players older than 16, with VFW teams rosters made up of 15- and 16-year-olds and some 14-year-old players.

"It's always tough in the summer because you don't always have the same guys at every game, but it is a great chance for us because every one of the guys we have playing will be playing high school ball next year," Olin said.

Cloquet was scheduled to start District 8 Division I playoffs Wednesday, July 20, at Hermantown against the No. 1 seeded team Grand Rapids. Cloquet is the No. 8 seed. South Ridge was headed to Greenway/Coleraine Monday, July 18, to begin their playoff tournament.

Nick Legarde has been doing double duty this season in his first year as head coach in the Esko summer baseball program. Legarde is coaching both the Legion and Junior Legion teams this summer. The Legion team has a 4-7 record this summer.

"Like most teams in the summer, it's been difficult to get a full roster," said Legarde, adding that they have quite a few kids who can play both Legion and Junior Legion.

The Legion team opened the Division II playoffs with a 10-run rule win over Barnum-Moose Lake-Willow River and followed that up with an impressive 6-3 victory over Proctor.

"Finn Furcht pitched well for us," said Legard. "We got down 3-0 early, but then he got dialed in and we rattled off three runs in the fourth and took the game over."

The Legion team was scheduled to play Wednesday in Ely in the third game of the tournament, after this week's Pine Knot went to press.

Between the two teams, Esko has 23 high-school-age players this summer, which is right about their average of the last decade or so.

"It's pretty much a normal year for our summer program," said Legarde. "They have played a lot of baseball and the quality of their play has really gone up."

Esko hopes to use the experience of the regular season this summer when they hit the playoff stretch this weekend.

The Barnum-Moose Lake-Carlton Legion Post 415 team fell from the Division II playoffs last week after going 1-2. A year ago the team did not win a game; this season they picked up four regular season wins as well as an impressive playoff win.

"The guys gave me everything all summer," said coach Zack Hartman. "After going winless last year, and still having such a young team, it was great to get our first win this year and a playoff win as well." 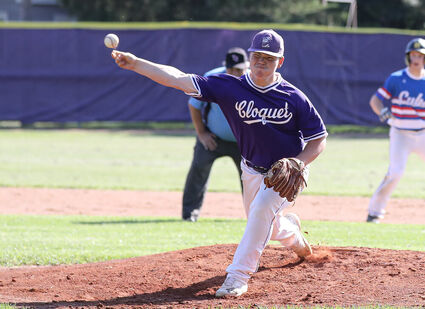 The goal for all summer programs is to gain as much game experience as possible, and after going 4-7-1, Post 415 was able to do just that.

"We gained a lot more interest in the game and the team has come a long way," Hartman said. "We moved up last year to play Legion ball with a young team and we knew we'd take our lumps, but the guys hung in there, and now they are starting to see what can happen."

The BMC squad fell to Esko in the first round of the playoffs, but then bounced back with an impressive win over Rush City before being eliminated by Mora.

"To win our first regular season game and a playoff game was great," said Hartman. "The boys were tenacious all season. They pitched well, we had a lot of one-run games; it was just a great season."