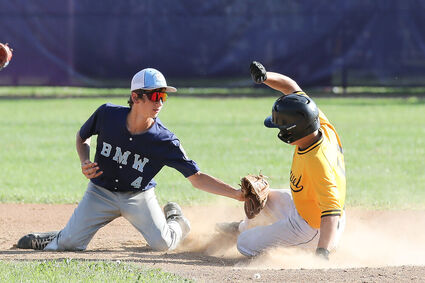 Sporting a lineup that consists of 12 players who are only 15 years old and four who are U14-eligible, the Cloquet VFW is making its mark this summer as a team on the rise.

"We are 5-11 on the regular season, but this group is extremely young and they have lost some close games to some real good teams," said coach Nate Knutson. "Our pitching has been consistently above average with guys like Grant Biebl, Nikko Gentilini and Jack Battaglia leading the group on the mound."

Defensively, the squad has had ups and downs, but they have the talent to be very good once the staff is able to solidify a lineup.

"It's hard in summer ball because you never seem to have the same lineup," said Knutson. "We need to develop consistency and get people in a position where they can succeed, and hopefully as we get set for the playoffs, that can happen."

A glimpse into that defensive prowess came Sunday night when Cloquet turned two home- to-first double plays in a game against Barnum-Moose Lake-Willow River and then topped it off with another double play in their first-game 5-4 eight-inning win.

For the playoffs, the VFW will add a couple of players from the Legion team who are age-eligible and also are double-rostered on the VFW team to bolster the pitching staff. Aiden Sievert and Drew Angell have spent the summer at the older age level, but now will aid the pitching staff during the playoff run.

"In playoffs, you need that depth in pitching," said coach Knutson. "Good pitching can make your defense look better and better defense makes pitching look better, so hopefully we can score enough runs and play solid 'defense' behind our pitchers."

On Tuesday night Cloquet played in Rockridge to determine the fifth playoff seed. Cloquet fell 11-10 as Rockridge got the walk-off win.

Cloquet now will get the sixth seed and they will host a playoff game against West Duluth at Mettner Field in Cloquet Thursday night, after this issue of the Pine Knot went to press.

The Esko Junior Legion squad boasts an impressive 7-1 record heading into the playoffs. They open with a home game Sunday with both the opposing team and time to be determined.

Junior Legion is for ages 16 and under and is similar to the VFW league that has been around for years.

"Our Junior Legion team is a tightknit group of all freshmen who play travel ball together," said coach Nick Legarde, who also coaches the Esko Legion team, which also rosters some of the Junior Legion players. "They hit the ball well and our pitching has been great."

The Barnum-Moose Lake-Willow River Junior Legion baseball team has had an impressive summer by going 17-9 in the regular season. Unfortunately, the team will not get a chance to play in the playoffs this week.

"It is our first year of playing Junior Legion-level baseball," said head coach Shawn Bode. "When you put all of our schools together, we are three kids over the DII level for Junior Legion-age baseball, and by the time we got everything figured out it was too late to apply to make the Division I playoffs."

The program includes five players who started for their high school teams last season. Barnum's Eli Gilbertson plays second base and started for Barnum High School this past spring. Moose Lake-Willow River high school players include Reese Bode playing shortstop, Lane Radzak patrols centerfield, Tyler Juhl plays third and Joey Steen is at first. All of those players have pitched this summer as have Luke Dewey and PJ Frisch, among others.

"Our strength is our pitching," said Bode. "We have 12-13 kids on any given night and 10 of them throw for us, with six of them eating up a lot of innings. We are really a team that is set up nicely to play in tournament formats where you play multiple days in a row because we have the depth at pitching."

Last week BMW split a pair of games on the road against the Cloquet VFW team as well as picking up another split against Grand Rapids. 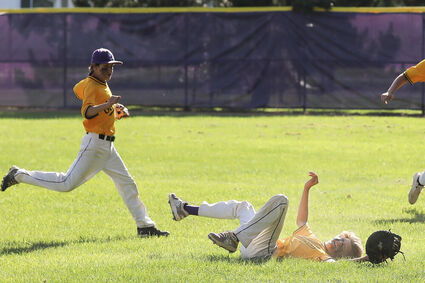 "We are 17-9 against Junior Legion/VFW opponents," said Bode. "Our team is just a good young group of kids who are mostly ninth-graders going into 10th grade."

The summer has been a good one for the players, as far as improving their game.

"We got a lot of games in and we beat some good teams including Esko and Proctor," said Bode. "I am a little surprised at how well this group has done, especially considering how young they are. I knew we'd be decent and competitive, but we've exceeded those expectations a bit, and that is what summer is all about."

On Tuesday night BMW hosted Pine City and picked up a 16-0 victory at home in Moose Lake.