Cardinals fly through U15 playoffs 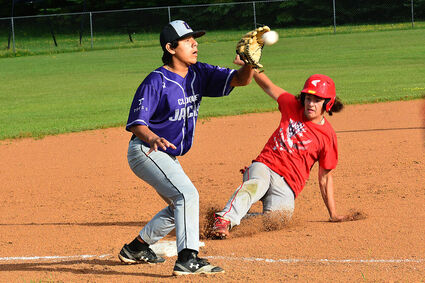 Cardinals player Jackson Eastman slides into third base as Cloquet's Marco Zegan works to get an out during Thursday evening's U15 playoff matchup in Cromwell. Cromwell won 11-1.

Don't look now, but the surprise of the Northland Baseball League U15 division has been the Cromwell Cardinals. The Cards have flown to an 8-3 record including three straight playoff wins - one of which was an impressive 11-1 home win over Cloquet last week.

"I am a bit surprised at how well we are doing," said Cromwell head coach Dean Levinski. "I knew we were pretty good, but I just didn't know how we'd stack up against programs that are traditional baseball powers."

The three losses incurred by the Cardinals all came at the hands of teams from East Duluth. Other than those losses, the team has been perfect this summer.

Eliyah Belden, an eighth-grader, led the Cards in their win over Cloquet by pitching a three-hitter. Belden also rapped out three hits and scored three runs.

"He's a special talent," Levinski said of Belden. "He was all-conference for us in the spring and he's had a solid summer."

Cam Johnson added a pair of hits and scored twice for Cromwell. Also scoring twice were Dylan Nyberg and Jackson Eastman. Lane Gervais and Brenden Gronner each scored a single run for Cromwell.

Cloquet's lone run of the game was scored by Marco Zegan, who doubled, walked and scored a run.

The Cloquet squad is composed of all 14-year-old players with one exception, so the future looks bright for the young group. 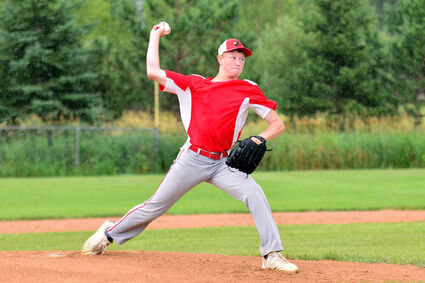 Cromwell pitcher Eliyah Belden throws a pitch during Thursday evening's playoff matchup against Cloquet. The Lumberjacks got only three hits against the eighth-grader.

For Levinski, who had been a longtime baseball and basketball coach in Cloquet before retiring, seeing the youth program in Cromwell starting to take off has been fun.

"It's pretty special to see how far this program has come and I give a lot of credit to a lot of people, including guys like Robert Dahl," Levinski said. "When we first started there wasn't such a thing as a routine out, but now our guys are making the routine outs look like actual routine outs. The confidence level of the players is growing every day and I think the future is really bright."

Cromwell played Tuesday night against one of the Duluth East squads with results unknown before the Pine Knot went to press.

Editor's note: We corrected a caption for the photo showing Jackson Eastman sliding into base after the paper went to press and was published online. We apologize for the error.