Runners get their feet wet at Chub Lake

For more years than anyone can remember, the local high school cross country teams have opened the season at Carlton's Chub Lake Park. The race, hosted by Esko, is more of a scrimmage than an actual meet, but it is a great way for runners to get their feet wet and see what the competition is like.

"I have no idea how long this meet has been held," said Esko coach Jerimy Hallsten. "It is a really good opportunity for the kids who have never been to a cross country meet before and it gives them a taste of what the season will be about. While we host the race, all the other coaches in the area help out by getting things set up, making up placement cards and those kinds of things."

Nine teams of boys and girls ran in this year's event. In an unusual twist, both boys and girls run at the same time. In all, there is a one-lap race, a two-lap race and then a three-lap race for the runners who will be varsity athletes.

"It is really a good way to introduce new kids to what a meet is," said Cloquet coach Chandra Allen.

Brenda Knudsen is the first-year head coach for the Carlton/Wrenshall Raptors and inherits a girls team that returns five runners from their state meet team a year ago.

"It was exciting to just get the kids back out running again," Knudsen said.

All told, nine boys and girls teams participated in junior high, junior varsity and varsity age levels. The event gave all the coaches a chance to evaluate their talent.

"I thought our boys ran decently, but they are a young group with three seniors, three juniors and the rest being sophomores and freshmen," Cloquet's Allen said. "I think we have the potential with some of the runners making it to state."

Calvin Snesrud has seen marked improvement after overcoming an injury during the track season and could be among the leaders for the Cloquet boys.

"The girls team is also young with one senior, seven juniors and a sophomore along with potentially a couple of freshmen who ran varsity as eighth-graders last year," Allen said.

Esko is also looking at a younger squad.

According to Hallsten, both teams have good work ethic.

"I think the fun thing for me was to watch how hard the kids ran at Chub Lake," he said. "They all ran their tails off and worked hard. They ran their hearts out."

Knudsen is enjoying the first season as head coach of the combined Carlton/Wrenshall team - one of the largest small school teams in the area.

"We have 20 kids out between the boys and girls teams," Knudsen said. "I feel if we work hard and avoid injury, the girls have another fighting chance at a state meet."

Knudsen's daughters, Abby and Sara Cid, are among those returning from last season's squad. Abby is a senior and Sara is a sophomore. Freshmen Isabel Riley and Ruth Sandstrom also return as well as eighth-grader Brielle Simula. Korah Crane - who was an alternate on last year's team - will return in a larger role during this season as a senior. Three younger runners who should help include Nadia and Teagan Tessier, in ninth- and eighth grade, respectively, along with eighth-grader Lucy Stevens.

Knudsen also has another runner who made it to state on the boys side as junior Jack Riley returns after reaching the state meet as a sophomore.

"We need to build the boys' numbers, but there is also some other talent on that team besides Jack," said Knudsen. "AJ Olesen, who ran a lot over the summer, should make an impact this year."

Other runners for the Raptor boys will be sophomores Gavin Gibson and David Tuttle as well as ninth-grader Karl Tuttle. Seventh-grader Anders Erickson is going to be good, according to Knudsen.

"We are excited to see how things will go this season," she said.

Cromwell coach Pete Koenig also has reason to be optimistic. The Cardinals return two runners who ran in the state meet last season. Noah Foster finished third in the Class A boys meet and Emaleigh Olesiak also qualified after another stellar racing season. 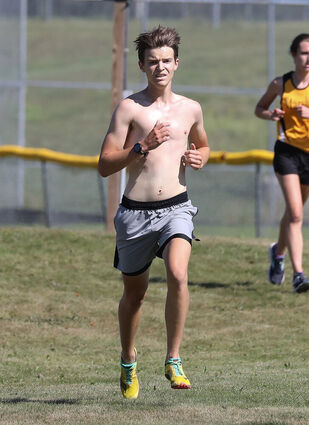 "They are our leaders," said Koenig. "We have a very young team with one seventh-grader, two eighth-graders and a couple of sophomores."

In the case of Foster and Olesiak, coach Koenig has them focusing on putting in mileage. Eventually they will switch to more high-tempo running as the season wears on.

Like all the coaches, Koenig is excited for the season.

"Right now with Noah and Emaleigh, it is all about staying healthy and keeping them fit," said Koenig. "If they can do that, they are such strong runners and competitors that good things will happen."