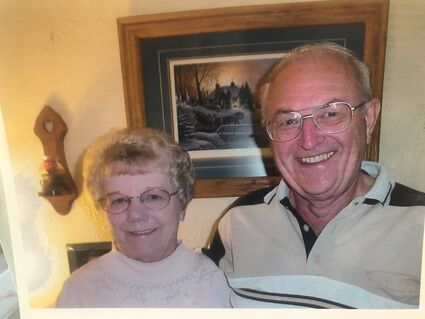 Arvid Leland Benson was born in Cloquet on June 4, 1932, to Anton and Signe Benson. His parents were dairy farmers from Mahtowa, and he was the third of five brothers. Arvid graduated from Barnum High School in 1950, where he was nicknamed "Lover Boy." He was an avid athlete in high school and played guard on the varsity team. Early on in life, however, Arvid realized that he wanted something besides farming in his future, so at the age of 18 he decided to leave the rural life and joined the U.S. Navy for travel and adventure.

Arvid joined the Navy in February 1951 and became an Electrician's Mate, ultimately attaining the rank of Petty Officer Second Class. He was assigned to the USS Orion, homeported in Norfolk, Virginia. During his time in the military, he visited several ports, including Cuba, Puerto Rico and the U.S. Virgin Islands. For his service during the Korean War, he received the National Defense Service Medal. He was honorably discharged from the Navy in January 1955.

After leaving the military, Arvid decided to attend college with dreams of a career in the business world: "I had always wanted to wear a white shirt to work." He enrolled at the University of Minnesota Duluth, majoring in business and economics with a minor in social sciences. He received his bachelor's degree in only three years in 1959. In order to help pay for his college education, he held several jobs, including construction, furniture delivery and electrical work, and proudly graduated from college debt-free.

With university degree in hand, Arvid hit the financial ground running. He first worked for a tax preparation company as a junior accountant, and shortly thereafter landed his dream job at Imperial Savings in San Diego, California, then the largest state savings and loan in the U.S. He became chief financial officer, working there for 25 years. Before retiring in August 1994, Arvid was CFO for the Foundation For Educational Achievement.

Arvid married his wife of 63 years, Marjorie "Margie" Eleanor Benson, on Sept. 21, 1957, in Barnum. They met at the Soo Hotel, where Arvid believes Margie was captivated by his smile and sense of humor. They decided to relocate to San Diego in 1959, after Arvid was hired by Imperial Savings. He and Margie raised three children, Scott, John, and Lisa. Quality family time included barbecues, road trips, camping, fishing, and dinner with the grandparents. Once Arvid and Margie retired, they became members of the Snowbird Travel Club, and for 24 years extensively explored the U.S. in their RV. Foreign trips were also of interest, including a visit to Arvid's ancestral homeland of Sweden. However, despite his vast travel experience, he always maintained that his favorite place on Earth would always be his native state of Minnesota.

At the age of 89, Arvid passed away July 29, 2021, at home in the care of family. He was preceded in death by his wife, Marjorie Benson; parents, Anton and Signe Benson; and his brothers Marvin, Mervin and Alden. He is survived by his brother Carl (Naomi) Benson; son Scott (Marni) Benson; son John (Roberto) Benson; daughter Lisa (Joseph) Kuharski; grandson Christopher (Beth) Benson; granddaughter Laurel (Christopher) Benson; grandson Brandon Kuharski; grandson Stephen (Caroline) Berndt; grandson Ryan (Mary) Berndt; grandson Michael Berndt; eight great-grandchildren, Cooper, Nolan, Bailey, Audrey, Carter, Juliet, Sutton and Lily; and nieces and nephews. A private memorial service was held at Featheringill Mortuary in San Diego, with his final resting place to be at the Riverside Cemetery in Barnum. The burial will be held at 10 a.m. Saturday, Sept. 17, 2022.