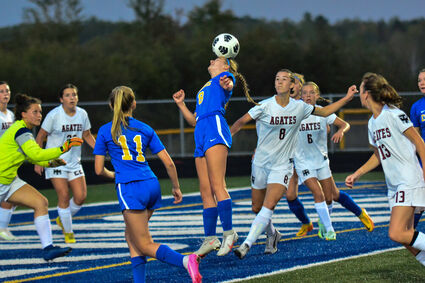 Entering Tuesday night's game against Two Harbors, the Esko girls soccer team sported a gaudy record of 8-1 and had the second best QRF ranking in the state.

The Agates came in as the No. 30 ranked team with a 4-4-1 record. When the final horn sounded at the Esko Athletic Complex, it was the Eskomos who came away with a 6-0 victory.

It didn't come easy at first. The Eskomos held only a 1-0 lead after the first half of play.

"We struggled for possession and came out flat in the first half," said Esko coach Sharon Lahti. "We were lacking spark, but our bench came through in the second half and provided us with that extra spark and got us going."

Temperatures at game time were in the 80s and humidity was high which also caused issues. Right before halftime, Esko goalie Hannah Roemer was knocked out of the game because of a collision with an Agate player which caused her to bloody her nose.

"Jordan Stodola came in and finished the first half in goal," said Lahti. "Jordan was nervous, but she did fine and then she came out and had two goals in the second half for us."

The lone first-half Esko goal was Britta Koski on an assist from Jordyn Randa. A host of players scored in the second half, including Kaitlyn McConnell, Stodola, Abrianna Madill,

"We did a better job of possessing the ball and swinging it through midfield and creating opportunities," said Lahti of the second half. 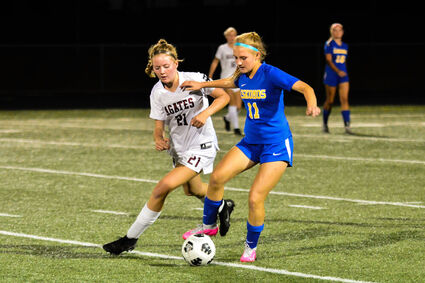 Esko's Britta Koski keeps the ball just out of reach of Ella Peterson and the Agates on Tuesday in Esko. Koski scored the first goal for the Eskomos.

Esko outshot the Agates 11-3 in the game with Roemer notching all three saves to preserve the shutout.

"Two Harbors tried to run some through-balls through our defense, but our back line played very well," Lahti said of Gwen Lilly, Liberty Clifford, Whitney Hanson and Reese Kuklinski on defense.

"Our back line includes three state track runners," Lahti added. "They are so good back there; it is hard to get a ball by them."

The win improves not only Esko's record to 9-1, but also improves their chances of continuing an upward climb in the QRF ranking.

Esko was scheduled to play Duluth Marshall on Thursday in Duluth. Their next home game is 5 p.m. Tuesday, Sept. 27 against Mesabi East.