South Ridge redeems itself over Cromwell-Wright

When South Ridge and Cromwell-Wright met in mid-September, the Panthers marched up and down the field, but self-destructed with five fumbles and Cromwell capitalized.

On Thursday, Oct. 27, the two teams collided again in the Section 5A playoffs.

This time the Panthers held on to the ball, coming away with a 32-13 win in Cromwell that erased the sting of that earlier 15-0 loss.

“We went in knowing that we should control the line of scrimmage,” said Panthers coach Brent Johnson. “We felt we did a good job of that in the game, and the difference compared to the first game was we didn’t give up the football on fumbles and interceptions.”

The Panthers also had the advantage of having more time to develop a passing game with 6-foot-10 Austin Josephson.

“Austin didn’t decide to play football until late, so his first game was against Cromwell, which was our third game of the season,” Johnson said. “We had some time to work with him, and it made a difference in the game.”

Enter Josephson, who hadn’t played since seventh grade but finished the season drawing double-teams and in command of the full passing route tree.

Responding to Cromwell’s TD, Panthers quarterback Ben Pretasky found Josephson on a 38-yard touchdown pass and run. Pretasky added the 2-point conversion run, pushing the Panthers ahead by a score of 14-7.

Following the Josephson score, the Cards looked like they would answer quickly. It wasn’t to be. A dropped pass that would have tied the game for Cromwell was followed by a 1-yard TD run by Bergum, giving the Panthers a 20-7 lead. Things took a further turn for Cromwell when its quarterback, Nyberg, who had just come back from injury, went down with another injury. The coaching staff had to scramble to adapt.

“That hurt,” said Gronner. “We were right in the game and then had the dropped pass, they scored, and Dylan went down. We got caught in trying to fight an uphill battle and we couldn’t overcome it.”

South Ridge blew the game open in the third quarter with back-to-back touchdowns by Anthony Lisic and Eli Coon on 3- and 2-yard runs, respectively. The Panthers were unable to convert on either of their 2-point conversion runs but pushed the lead to 32-7.

Bergum led the Panthers rushing attack with 12 attempts for 110 yards or an average of 9.2 yards per carry, while Josephson caught three passes for 85 yards.

“He runs hard and he is patient and waits for his openings,” Johnson said of Bergum.

Nyberg had a big start to the game for the Cards with eight carries for 48 yards before bowing out with injury as the Cards fell to 4-4 on the season. 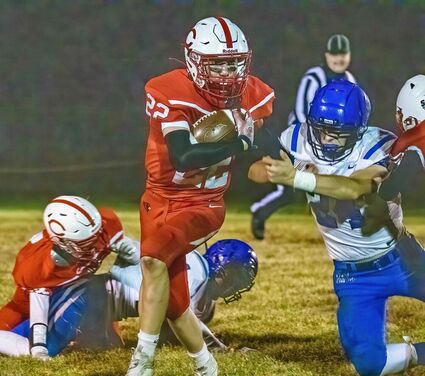 Brady Dahl breaks free for Cromwell-Wright last Thursday. The Cardinals were stymied by South Ridge, which plays in the section final tonight against Ogilvie, a team it lost to 56-6 earlier this season.

“It was a good season and an odd season,” Gronner said. “I think at times, considering how young we are, that we exceeded expectations. In almost every game we were undersized, and not as physical as the other team, but yet we found a way to win four games.”

Cromwell only expects to lose two players, so the coach wants his team to get bigger and stronger and come back motivated for next season, he said.

While the season is over for Cromwell, the Panthers now set their sights on Ogilvie, a team which beat them 56-6 the third game of the season.

“They dominated us and we didn’t play nearly as good as we can,” Johnson said. “We need to stay away from penalties in the game.”

The Section 5 championship will be played at 6 p.m. Friday, Nov. 4 at the Esko stadium.