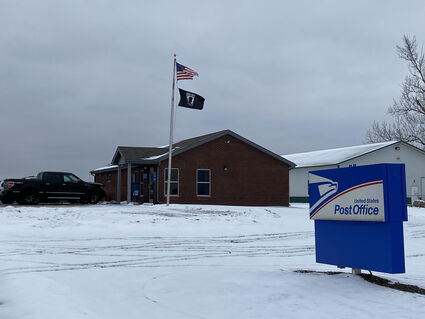 The United States Postal Service office in Barnum has been hit with an employee shortage during the busiest time of the year for postal workers.

The United States Postal Service appeared to work quickly to address mail delivery issues in Barnum this week after a social media post raised concerns about service in the area.

A Facebook post by a Barnum-area letter carrier said the Barnum post office was working with one carrier for all routes, with people out sick and hospitalized.

"We are doing the best we can with what we have," the post said. "We have to focus on packages right now because the post office is completely full to the ceiling."

The carrier's post assured residents that their mail was coming. In social media exchanges with followers, the carrier said clerks were also delivering some mail.

"Local management in Barnum (was) aware of delivery issues and took steps to address the concerns," Desai Abdul-Razzaaq said in an email. "All mail delivery services in Barnum are current and on time. We appreciate the patience of our customers."

They added that the Postal Service would continue "flexing" its resources to match the workload, but declined to get into specifics of how that's accomplished.

In one response to the original social media post, the carrier said they felt someone ought to explain the situation to customers.

The social media thread first appeared last week, but was taken down by late Monday. The employee confirmed a reprimand. The Pine Knot is not naming the letter carrier to protect them from additional retaliation.

During some of its most recent news releases, the Postal Service praised its current performances. On Dec. 5, the Postal Service said it was "keeping up the pace as the hustle and bustle of the holiday season gains momentum," and that its carriers were delivering as early as 6 a.m., specifically mentioning "metro areas" across the country. Additionally, the Postal Service asked residents throughout the region to keep porch lights on in order to protect carriers arriving in the dark.

In September, the Postal Service announced it was hiring throughout the region, offering rural carrier positions at $19.50 per hour.

The Postal Service has not been immune to current economic pressures, which include a flush workforce with fewer candidates for open positions.

But it's also been victimized by its own decisions. As it competes with corporate competitors, the Postal Service has behaved more like its counterparts, delivering packages on Sundays and "rationalizing" a once robust network. The Postal Service has reduced its physical infrastructure, with scores of rural post office closures and rural sorting operations being centralized into metro areas.

In calling for new employees in September, the Postal Service seemed to leave behind the network rationalization era in favor of "our innovative and bold 10-year plan," it said, one "focused on building a more stable and empowered workforce."

"Our employees are our greatest asset and we are investing in our new employees by providing robust training and on-the-job support," the Postal Service said.

In July, the Postal Service announced it would begin procuring scores of battery-electric vehicles as it worked to reshape its fleet.