Bombers light a fuse in second half

Carlton's Aaron Schila uses a screen from teammate Danny Eggert in an attempt to shake Barnum's Jacob Hultgen in a game Friday in Barnum. The Bombers used an explosive second half to down the Bulldogs.

Leading by just nine points at the end of the first half, 27-16, the Bombers lit it up in the second half by scoring 50 points to secure the win.

Did they ever! Ten Bombers scored, with Joe Peterson leading the second-half surge with 19 points. Also scoring in the double digits were Reed Kornovich with 15 points and Garrett Coughlin with 12 points.

Leading the Bulldogs in scoring was Kristian Herman, who recorded 17 points and was the only Carlton player to score in double digits.

"I felt our defense played well, but we had a hard time stopping their inside game at times," said Newman.

Things were fairly tight early in the second half with Carlton trailing by nine points, but when Spencer Rousseau went down with an injury, the balance shifted and the Bombers scorched the net for 50 second-half points. 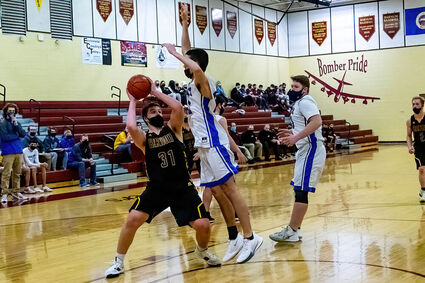 Barnum's Garrett Coughlin gives a fake to throw off Carlton's Trevor Ojibway as the Bombers work to the basket.

"Coming off playing a tough Moose Lake game on Thursday the night before, our team was tired, and after Rousseau got hurt with 17 minutes left in the second, things turned for the worst at that point," said Filipiak.

Carlton was not a match on Friday for the team balance as 10 players score for Barnum. Also scoring for the Bombers were Jake Hultgren (8), Jayden Charboneau (8), Willie Richardson (6), Layne Wickstrom (3) and two points each for Matt Berry, John Stevens and Evan Gustafson.

On Tuesday night the Bombers defeated Cromwell-Wright 42-27 and improved their record to 6-3 on the season.