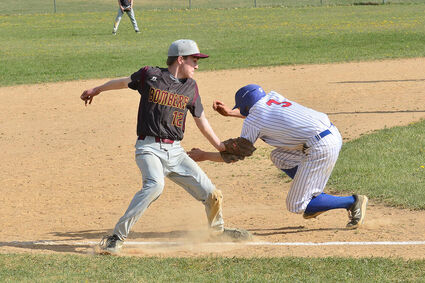 After three innings of play at Chub Lake last Thursday, the Bombers looked like they were on the way to a win with a 3-0 lead. That all changed in the fourth inning when the Bulldogs exploded for five runs and eventually pulled away for an 11-7 win.

Barnum edged ahead in the third inning with runs by Matt Berry, Henry Dammer and Caleb Hautajarvi. The inning started with Berry walking stealing second and then Dammer walked before Hautajarvi singled to reach base and eventually scored to give the Bombers the 3-0 lead.

"Berry just puts the ball in play and uses his speed to get hits," said Barnum coach Tony Bender. "If he gets on base, he can steal bases for us. Henry has struggled all year at the plate and managed to get a key hit for us."

Carlton batted back in the fourth inning as Aaron Ermatinger, Ben Hille, Trent Bagne, Kyle Siiter and Joe Solomon all scored, giving the Bulldogs the lead at 5-3.

"It was just a matter of seeing the pitcher for the second time to get our offense started," coach Schmidt said. "We figured out our timing and started hitting."

Barnum picked up a pair of runs in the top of the fifth inning when both Jake Hultgren and Berry scored to tie the game at 5-5, but the Bulldogs added a run by Ermatinger to go back up 6-5 at the end of five innings of play.

"We have a team that has to manufacture runs any way we can," Bender said. "We've been doing some creative things this year. A lot of bunts sacrifices and squeeze bunts and stealing as many bases as we can. It didn't help that we left a lot of runners on base that were in scoring position."

After the Bombers failed to tie the game in the top of the sixth, the Bulldogs came out with guns blazing in the bottom of the inning. They tacked on five more runs with Solomon, Eggert, Kristian Herman, Ermatinger and Hille all scoring to push the Carlton lead to 11-5.

Ermatinger was especially impressive for the Bulldogs with a 4-for-4 performance at the plate and three runs scored.

"Aaron's just steady at the plate," said Schmidt of Ermatinger. "He puts the ball in play and makes things happen and he's never out of an at-bat. He's just as big a threat to hit with two strikes as he is with no strikes."

Barnum managed to plate a couple of runs in the top of the seventh when Berry and Dammer both scored, but it wasn't enough to overcome the Carlton lead. 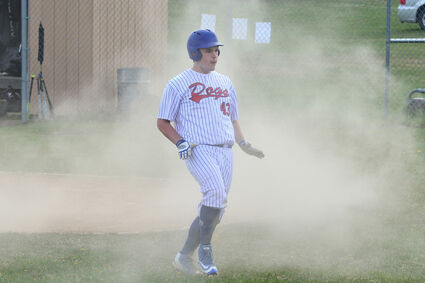 Carlton's Nicholas DeVriendt-LeDoux celebrates in a cloud of dust after he crossed homeplate in a win over Barnum.

Both squads are seeing improvement as the spring season wears on and that's exactly what a coach wants to see as playoffs approach.

"We are not a particularly young team, but we are inexperienced and that shows up at times, but these kids battle every game and we are hoping to keep improving as the season winds down and we head into playoffs," said Schmidt. "If we're playing our best ball then that's all I can ask."

Those sentiments were echoed by Barnum's Bender.

"We played poorly in the field with six errors," Bender said. "We have to get better to win and we have been in most games this year until we have a bad inning. Other than that we could be a .500 team. We are improving with our pitchers throwing strikes. Hopefully we can clean things up defensively."