It's crunch time on court 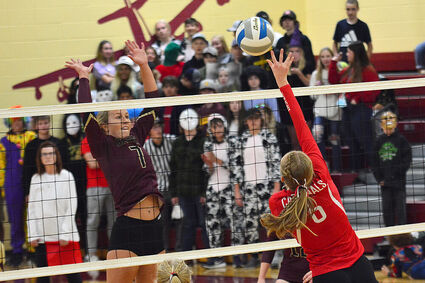 Cromwell-Wright's Andrea Pocernich tries to tip a ball past Barnum's Reese Miletich as the Cardinals and Bombers faced off in the section 7A playoffs Friday night. Barnum got a sweep and advanced to the next round.

The Section 7 girls volleyball playoffs kicked off in earnest last week. Opening games in tournament action were played on Wednesday with second-round games played on Friday.

Barnum entered the tournament as the No. 1 seed in Subsection 1 in Section 7A and they have not dropped a set in two matches. Last Wednesday the Bombers opened tournament play by playing neighboring Wrenshall. The Wrens had entered the tournament seeded No. 8 and on Monday opened play by beating No. 9 Silver Bay. But on Wednesday, the Bombers easily handled the Wrens to the tune of 3-0 and continued that dominance Friday by beating No. 5 Cromwell-Wright 3-0. Cromwell-Wright had knocked off No. 4 seeded Cook County 3-2 to advance to the game vs. Barnum.

The other two local teams in Section 7A were South Ridge and Carlton. The Panthers came into the tournament as the No. 3 seed and the Bulldogs were the No. 6 seed. The two teams met Wednesday in Culver with the Panthers winning 3-0 as the Bulldogs. The Panthers moved on to second round action Friday and disposed of No. 2 Floodwood in Floodwood 3-2.

Opening round play last Wednesday in 7AA saw Subsection 1 top seed Proctor down No. 8 Two Harbors 3-0. No. 2 Rush City eliminated No. 7 Moose Lake/Willow River. Esko, the No. 3 seed, beat No. 6 Hinckley-Finlayson 3-0 in Esko.

Esko, the lone local 7AA team left in the tournament, bowed out on Friday when they were beaten by Rush City 3-2. Rush City was the No. 2 Subsection 2 seed. 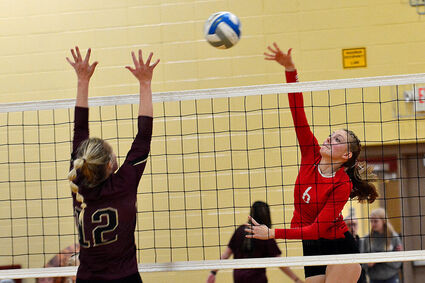 Cloquet defeated Hermantown just two weeks ago in the last game of the regular season, which allowed Cloquet to capture the Lake Superior Conference title.

Cloquet will face No. 1 Grand Rapids or No. 4 seed North Branch. The 7AAA championship game is set for 1 p.m. Saturday, Nov. 6, at Cloquet Middle School.