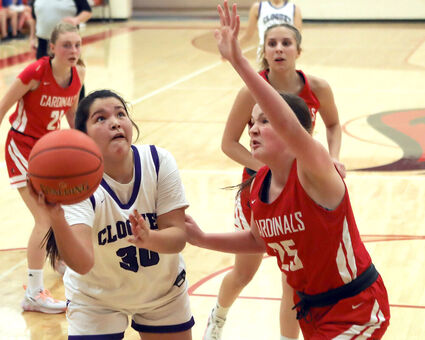 Cloquet's Justice Paro gets past Cromwell-Wright's Jill Anderson for a basket during Tuesday's game. The Lumberjacks overpowered the Cardinals 61-47.

Entering Tuesday night's home game against Cloquet, the Cromwell-Wright girls basketball team was undefeated and sported a 4-0 record. The Lumberjacks came in with a 3-2 record, trying to reverse a two-game losing streak. After the dust cleared, Cloquet came away with a 61-47 road victory over the Cardinals.

"It was just a great atmosphere, and it always is at Cromwell," said Cloquet coach Heather Young. "The fans are right on top of you, they're vocal, and they just make it a great place to play."

The 'Jacks responded immediately as they raced out to an early lead. At halftime, they led the Cards by 29-19.

"We struggled in the first half with their aggressiveness and how physical they were," said Cromwell coach Jeff Gronner. "We didn't handle their physicality well and they had us on our heels."

At the start of the second half things changed. Andrea Pocernich went on a tear, scoring 10 points in a row as the Cards went from trailing by 10 points to taking a 34-33 lead with about 11 minutes remaining. However, the Lumberjacks answered quickly and assumed control of the game as they pulled away to the win.

"They kicked our butts over the last 10 minutes of the game," Gronner said. "I think because we have a lot of freshmen and sophomores that were playing in their first big game that they just didn't handle it well, but I know it will make us better."

Pocernich led the Cardinals with 20 points while Maddy Young and Alexa Snesrud provided a one-two punch for Cloquet with 18 and 16 points, respectively.

"I liked how our girls handled the atmosphere and how our defense caused some frustration with their offense," coach Young said. "We did a good job of taking care of the ball for most of the game. Even when they made their run, our girls were calm and at ease and didn't lose their poise." 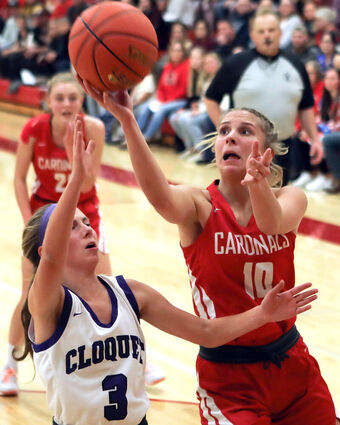 Also scoring for Cloquet were Ava Carlson and Justice Paro with nine points each, Caley Kruse with six, and three points for Kiley Issendorf.

"It was a nice road win for us," said Young. "Coach Gronner does a great job with his team and we know we will always have a tough game against them."

After Pocernich's big night the Cards got a 13-point effort from Sascha Korpela, Siiena Anderson chipped in with eight points, and Kyra Granholm and Isabella Anderson scored three points each.

"I was a little bit surprised about how we handled their aggressiveness," Gronner said. "This will only make us better, and I think it is pretty cool that a big school like Cloquet is willing to come and play a small school like us. We really appreciate their willingness to come and play us."