Chad Hart of Esko takes first place in the 100-meter hurdles, with a time of 17.58. Find more track photos at PineKnotNews.com.

Strong headwinds didn't help times, but there were plenty of top local performers in the Section 7A track meet last week at University of Minnesota Duluth.

Both the Esko boys and girls teams took top honors at the meet. The Esko boys scored 153.5 points to easily take first and the girls scored 143 points to do the same on their side of the equation.

Gary Beaudot, head boys track coach, said Esko will have the most athletes representing Section 7A at the state meet this week.

"We definitely have more events that our athletes qualified in school history as far as I know," Beaudot said. "We qualified in 22 total events including the girls, so it should be a great experience for so many kids."

While Esko dominated as a team, a number of local schools are sending kids to state, those who finished first or second.

In a number of cases, however, it was Esko that finished first AND second.

The Eskomos went 1-2 in the boys 100-meter dash with Mason Perich outpacing teammate Braden Lowe in a nip-and-tuck finish. In the 200-meter dash it was brothers Mason and Makoi Perich of Esko finishing in first and second as both qualified for the state meet.

Noah Foster of Cromwell solidified his spot at state by winning the 1600 in a tight finish by slipping past Ian Thorpe of Two Harbors. The 3200 was won by Connor Thoennes of Greenway/Nashwauk/Keewatin with Ben Meysembourg of Esko capturing second place.

In the 110-meter hurdles, Esko's Chad Hart was the winner and South Ridge hurdler Tony Cummins blew away the field in the 300 i hurdles, winning by more than a second.

The Esko 4x100 relay team of Lowe, Carter Zezulka and the Perich brothers won with a time of 43.88. The ML/WR team of Chase Clausen, Jakob Mossberg, Logan Orvedahl and Kaden Robbins was second.

Cromwell-Wright will send its 4x400 relay team to State after finishing second in that event. Andres Angulo, Foster, Liam Schoenberg and Dylan Nyberg finished just behind Greenway in that event.

Esko took second in the 4x800 relay, with the team of Keone Anderson, Brett Lillo, Ben Meysembourg and Nate Rengo doing the honors.

Sophomore Mark Hall of Barnum secured a spot at State by placing second in the discus behind Ethan Maas of Two Harbors.

Esko's Nikolas Martineau won the high jump, Jackson Thompson of ML/WR was second in the pole vault, while Makoi and Mason Perich of Esko went 1-2 in the long jump. Makoi Perich was also second in the triple jump.

Esko girls head coach Matthew Peterson said he was more excited than surprised that they did so well, adding that the girls are not only talented athletes, but they also "truly care for one another and support everyone's successes."

"[I'm] excited to see their hard work and dedication to themselves and their teammates pay off with their late season success."

Emily Rengo started things off by winning the 100-meter dash. Kaitlyn McConnell did the same in the 200 meters.

Esko provided some fireworks in the 100-meter hurdles with Gwendolyn Lilly narrowly defeating her teammate Megan Chopskie as the duo raced side by side to the finish line. Lilly also ran to a first-place finish in the 300-meter hurdles. 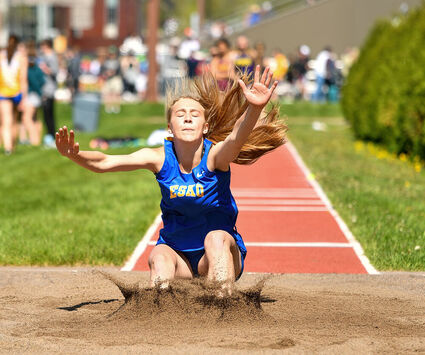 "Going into the season it was our hope to build off of last year's team success of winning the Conference and Section 7A championships," Peterson said. "The girls accepted that challenge and really blossomed into an even better team and I couldn't be more proud of them."

The state meet will be held Thursday and Friday at St. Michael-Albertville High School. Peterson said he's optimistic about the Eskomos' chances.

"If they compete at their level or exceed them it could be a special day," he said.