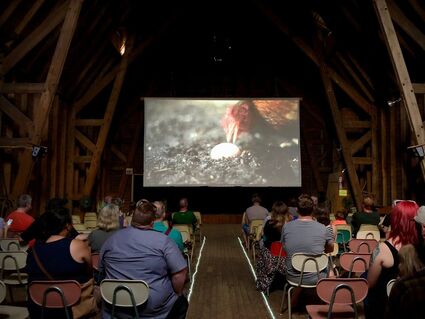 Once again, arts entrepreneur Annie Dugan and her family are offering up a mix of 11 remarkable films for their June 24-25 Free Range Film Festival in their family barn. I've had a chance to review some of them. Here are my takeaways.

For me, "A Life on the Farm" is the standout. A nephew discovers a stash of home videos made over several decades by a wacky uncle, Charles Carson, a farmer in rural England. With his friends, the nephew creates a feature-length home movie out of the videos. It includes footage of a cow giving birth, Charles pulling and cooing in encouragement. It shows Charles resourceful as well as playful, incredibly energetic and funny. "It's fun to watch a man so old having such a good time - art should not only be the province of trained artists!" his nephew said. I'm not sure I've ever laughed so much viewing a film.

"Say His Name: Five Days for George Floyd," directed by Cy Dodson, puts together footage from the George Floyd murder and the eruption of protest following it. It shows the anger, the chaos, the fires, the shootings, views of the protestors the day of and after. It's 20 minutes long and hard to watch. Many mourners, many angry, many distressed at the fires and storefront damage following the killing. Neighbors lamenting how the neighborhood has been trashed, that people have lost jobs. It's not pretty. Storefronts are damaged, people are hurt. But people come together to stand for their homes, their neighborhoods, and their city. And for justice for George Floyd. "It's terrifying," says one woman. "This is my home, this is my place." The footage shows Native Americans, African Americans, white folks convening for days, helping to chart a course forward. Over the coming days, many people provide bags of groceries for residents. They pitch in, clean up, sweep the streets and create murals for George Floyd on the walls.

"Final Chapter," a short video directed by Conor Holt, visits a family-run bookstore in Van Nuys, California that opened in 1958. Proprietor Bill Wirt and his sister took over after their parents retired. People think, "Oh, yeah, it would be fun to have a bookstore," says Wirt. "It's great working with my sister: we only argue about what to have for lunch." He remembers some high times, like when Rock Hudson came in with a box of books to sell. "To be a good actor, you have to be a good reader. Many are voracious," says Wirt. But after 60 years in the family, they've decided to close. Rent and overhead are pricey. The Valley once supported five or six bookstores here, but only two or three have survived. "People do want books, but many buy online. But where do you get to look at them?" asks Wirt.

And there are more. Visit the Wrenshall barn that's been converted into a performance space on Friday and Saturday evenings, June 24-25. Find the schedule and more at https://www.freerangefilm.com/