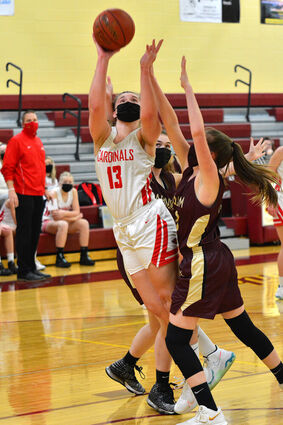 Cromwell-Wright's Natalee Hakamaki cuts through Barnum defensive coverage on a shot at the basket during Thursday's matchup between the Cardinals and the Bombers in Barnum.

"We were able to rush out to a 17-0 lead, and then cruised from there," said Cardinals coach Jeff Gronner. "We did have our season-high in turnovers though, and that is something we need to clean up."

The big two in scoring for the Cardinals were Sascha Korpela and Natalee Hakamaki. The junior duo scored 19 and 16 points, respectively, in leading Cromwell-Wright to the win.

"Cromwell is a very disciplined team," said Barnum coach Mariah Minkkinen. "They play hard and are really good at picking up players early in transition, which makes it difficult to move the ball offensively. I thought as a team we did a good job staying calm under the pressure."

Leading the Bombers in scoring were Rayna Klejeski and Anessa Davis with 12 and six points, respectively.

Despite his team giving up just 33 points, Cromwell coach Gronner would like to see better consistency on the defensive side of the ball.

"Overall, I am pleased where we are as a team," Gronner said. "The hardest adjustment is the girls being thrust into new roles. We lost a lot of scoring so we have girls that are being counted on to score more, and that is an adjustment."

Last Friday night the Bombers hit the road for the long trip to Grand Marais, and fell 70-55 to Cook County.

"I thought some of the girls did a great job attacking the basket and getting to the free throw line against Cook County," said coach Minkkinen. "We have some players who have figured out the level of intensity that you need to play at on defense. We have also been working on building good defensive habits like having good ball pressure, being in the right spot, and jumping to the ball."

Barnum's record is now 0-7 on the season.

Heavy Cardinals defensive coverage by Hakamaki makes it difficult for Barnum's Rayna Klejeski to get a shot off under the net.

Monday night the Cards traveled to Iron to take on Cherry, one of the hottest small-school teams in northern Minnesota this winter. Last week they defeated a very good MIB team and on Monday the Tigers beat the Cards 47-45.

"Cherry is a very good basketball team," Gronner said. "They have the inside track on the No. 1 seed. We played really well offensively in the first half and built a 6-point lead, but then struggled mightily in the second and only scored 11 points in that half."

Korpela and Hakamaki had 18 points each to lead the Cards in scoring while Pocernich added six and Brandi Collman finished with three points.

"Our defense and rebounding kept us in the game and we had a good 3-point attempt to win with one second left that didn't drop," said Gronner. "We need to play more consistently at both ends of the floor. There is much room for improvement."

The loss to Cherry dropped the Cards record to 5-3.